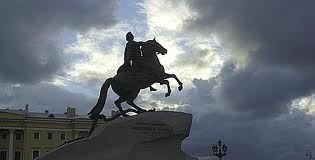 Despite the prevailing bleak economic outlook, there is a silver lining for investors willing to brave the odds to do business in Russia, a new report found. Russia continues to shine among the world’s high growth economies, despite a steady stream of bad economic news about the country's investment climate, according to KPMG’s Competitive Alternatives 2012 report released on Saturday. The report, which helps businesses make informed decisions on where their operation will have the best opportunity, found that Russian leaders may have indeed been hard at work to retain current investors while trying to attract new ones.
As with previous reports, the KPMG's latest report compares the costs of doing business and other competitiveness factors in more than 110 cities in 14 countries. But for the first time, the report included the five leading high growth countries – Brazil, Russia, India, and China (also known as BRIC) and Mexico. “Over the last decade, these five countries have nearly doubled their share of world output and they now account for one fifth of the global GDP,” said the authors. Their rapid economic growth has been integrally linked with their lower labor costs and increasing importance in global supply chains, said the report. However, rapid economic growth has also led to the emergence of a large and growing middle class in those countries, creating a more self-sustaining economic base.The survey expresses business costs as an index, with the United States being assigned the baseline index of 100. Compared to the U.S. baseline, business costs in the five emerging countries are below those in the nine mature countries examined. China and India are the cost leaders among the high growth countries, with overall business costs at 25.8 and 25.3 percent, respectively. Mexico ranks third among the countries, with business costs 21 percent below the United States, while Russia ranked fourth with business costs 19.7 percent below the U.S. baseline. Among mature markets, the United Kingdom, the Netherlands and Canada are the low-cost leaders, with business costs over five percent lower than in the United States. Russia received high marks in a range of cost and non-cost issues related to the high growth markets. Russia is the only high growth country in the study to have achieved universal literacy. Russia and Canada are world’s leaders in higher education attainment, with at least 50 percent of their labor forces being educated at the tertiary level. While India has emerged as a global IT and call-center hub, nearly 40 percent of its population is still illiterate. Russia, together with Mexico and Brazil, is also highly urbanized, with at least two thirds of the population living in urban areas, another indicator of the potential labor supply. By contrast, less than half of China’s population lives in urban areas, even though the proportion of urban dwellers in China has almost doubled since 1990.Among high growth economies, Russia’s indicators on innovation employment are generally similar to those of mature economies, even though its R&D spending is lower than in the mature economies and the business executive survey rates Russia’s capacity to innovate as quite low. Though Russia still trails China in the sheer scale of infrastructure investments, Russia now ranks first among the high growth countries for the quality of its information and communications technology (ICT) infrastructure. However, it still ranks behind all of the mature countries on this measure and also has the second lowest score among the 14 countries for its physical distribution infrastructure, which has suffered from decay since the collapse of the Soviet Union.The primary focus of the latest report is, however, international business costs, including the cost of living, labor availability and skills, regulatory environment and personal quality of life factors. The report found that total costs per employee are higher in Russia and higher still in Brazil. Both nations have high statutory plan and benefit burdens related to social security, private medical and pension plans, employee transportation and meals, and a high number of holiday and vacation days, all of which substantially increase the total cost per employee. For businesses focusing on manufacturing operations, countries with the lowest effective income tax rates are Canada, followed by China, Russia, and the United Kingdom, all with effective tax rates below 20 percent. And for general corporate services operations, the lowest effective income tax rates are offered by Russia, Canada, the United Kingdom, and China. Taxes typically represent up to 18 percent of location-sensitive costs across the locations and industries examined, said the report.When labor costs for administrative and customer service staff are taken into account, Russia, India and China are the most cost-competitive countries for digital operations among the high growth markets. In terms of human development, which is broadly based on life expectancy, education levels, and income components, Russia, Mexico and Brazil are thought to have achieved “high levels” among the high growth economies according to the United Nations.On the flip side, Russia consistently ranks below other countries in the areas of government effectiveness, rule of law and corruption. Among the high growth countries, Brazil receives the highest ranking in the rule of law and corruption categories, while Mexico is the highest ranking in the government effectiveness category. Russia’s performance is viewed as being the weakest among all 14 countries across each of these three indicators. And while the high growth countries generally have a young age demographic, providing advantages for both the labor supply and consumption, Russia remains an exception with an aging population.
Publié par claude@investlogic à 02:10