Gold : From the Chart Room


Why Gold pulled back

As of November 16 Wholesale Gold Bullion prices fell below $1,710 an ounce Friday morning in London, dropping below that level for the second day in a row, as stocks, commodities and the euro all fell and US Treasuries gained ahead of negotiations among US lawmakers about the so-called fiscal cliff.
"Gold is being seen increasingly as a source of cash," says Simon Weeks, head of precious metals at bullion bank Scotia Mocatta. Liquidation of gold can cover losses elsewhere. 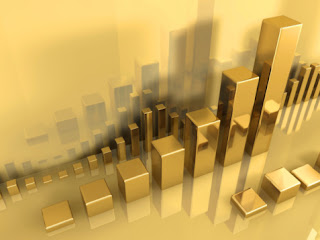 There are plenty viable reasons why gold is pulling back, today we'll cover the three most pressing...

"Three strikes and you're out!" 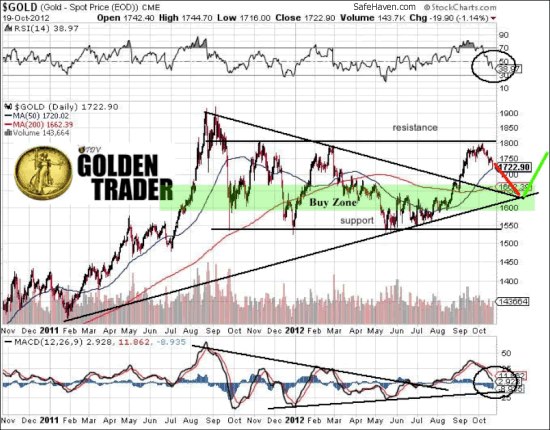 With each passing day, traders discounted gold's probability to head higher and thus, on a short-term basis, gold sold off. After all, traders want short-term profits and if it's not likely that gold will bust above $1,800 and on to higher-highs...they head to greener pastures.

That's where things stand today. So from a technical, chart-watching standpoint gold's dip could be as simple as that. I can hear it now in the pit... "Three strikes and you're out!"

President Barack Obama’s re-election has given gold investors even more to think about. With the election over, investors can focus on other issues, such as the so-called fiscal cliff, a combination of tax hikes and spending cuts that will come into effect on Jan. 1 unless politicians reach a budget deal.

With the fiscal cliff approaching fast, an entire new group of investors will be pouring into the precious metals in anticipation of the grim fact that the U.S. is going to try and print itself out of debt. For all its economic significance, the fiscal cliff is at heart a political issue, one that revolves around whether politicians can reach a temporary agreement. The fiscal-cliff debate will be a factor for gold, but so too will events elsewhere, such as in Europe.

In Europe, the big question is whether the euro-zone debt crisis may push the fragile global economy back into recession. Panic in Europe would also see an increase in gold prices as investors seek the safety of a stable store of value.

The U.S. dollar is key in the outlook for gold, as the two tend to have an inverse relationship. When the dollar rises, gold tends to drop.

In the past six months gold has been controlled by the movement of the U.S. dollar. 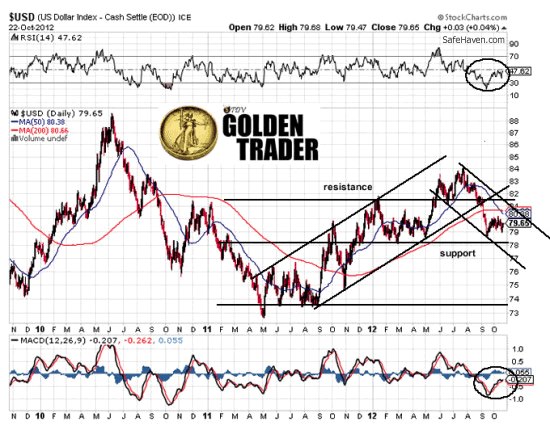 See, like all other staple commodities, gold is bought and sold in U.S. dollars, the world's reserve currency. We're not talking about manipulation here. Instead, it's just the direct relationship that the dollar and gold share.

With trouble looming for the global economy and currency woes plaguing the Eurozone, there's been a lot of support for the dollar. And if you didn't notice lately (I can't fault you) the dollar recently broke above its sideways trading pattern -- which propped the dollar index back above 80. This is a significant move.

It's not out of the question to see another short-term run for the dollar, either. Looking at the fundamentals, the Eurozone doesn't seem to be fixing itself anytime soon. And to be sure, any weakness in the Euro makes for a stronger dollar.

Add in the fact that the U.S. is having a little rebound in energy production and manufacturing (both positive for the dollar) and you'll see that the short-term outlook for the dollar could be up -- even in the face of some Bernanke push-button, money-printing economics!

Time will tell on this last point. But just remember that the U.S. dollar is in control here. Whereas we're used to a weak dollar and inflationary measures by the Federal Reserve, a short-term bounce could create more headwind for gold. It's sad but true.

A move below recent support around 78 on the index, if this happens and support is broken, it could lead to a cascading move downwards towards 75 or possibly 73.75 as the next major support level. If the dollar does break down, gold and silver will shoot much higher.

The best hope for the US dollar is for it to sit in a channel between 78 and 81.50 which is where we think it could trade sideways for some time until we clear the elections and get some direction on fiscal policy from the Fed. If the dollar goes sideways, Gold and Silver will also trade in a sideways channel. More than likely we will get some clear direction once the election are done.

The world is so full of possibilities for scaring the hell out of investors and triggering a rise in gold prices that it is likely that such an event will occur within the next nine months.

The Overall Gold Trend, Is Still Our Friend...

The U.S. dollar helps explain gold's short-term pullback, but it can also give us a good idea as to where the metal may be headed.

While we hate making predictions on what the gold price will do short term, we suspect it could consolidate between $1650 - $1750 for the remainder of the year. While we are entering a stronger part of the gold season and the fundamentals are lined up to suggest higher prices, we have conflicting events such as a huge concentrated short position, the US elections, the US fiscal cliff and tax loss selling to deal with for the remainder of the year.

With 2 strong opposing forces acting on one another, the price of the metal may consolidate around $1650 - $1750 for some time until either the bulls or bears clearly take this market in one direction or another. Until then, all we can do is sit around and wait for a clear break outside the trading range that has been established over the last year.

You see, regardless of Eurozone worries and a bump in U.S. manufacturing, the Federal Reserve has yet to show ANY ability to stop adding more dollars to its inventory. This is the same "dollar be damned" trend that took gold prices from $300 to today's price near $1,700.

All of the long-term fundamentals that lead us to buy gold -- including the last point about the Fed -- are still intact.

If you're into gold for the short-term trading action, today's market presents a tricky proposition. But if you're in it for the long-haul, as we are, the recent pullback is nothing more than market noise in gold's eventual move higher. 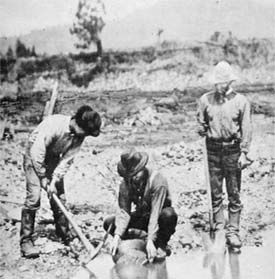 We shall keep our boots muddy for you

P.S. Actually, investors can concentrate their gathering of information on developing trends in the resource industries by attending conferences and events that provide exposure to the major companies in the industry, their executives and the analysts that follow those companies and industries as well as networking opportunities with other investors. With the rapidly changing investment scene requiring increasing amounts of background information, these opportunities are becoming a mandatory part of any investment strategy.

That is exactly what we aim to offer at Investlogic to support our clients and partners in their efforts. Hence here you will find some research and summary on the Gold industry and the gold miners.
I spent the first half of last week at the Geneva Gold Mining Investment Conference, talking with investors, mining companies and analysts about the state of the gold industry. The annual conference falls at an interesting time of the year, as the price of gold typically corrects in October. In fact, going back 30 years, the historical seasonality of gold has been to rise during September, with a subsequent correction in October. (see daily news on our site)
Publié par claude@investlogic à 10:32