Moscow hopes to increase overland transport of goods between the two continents. 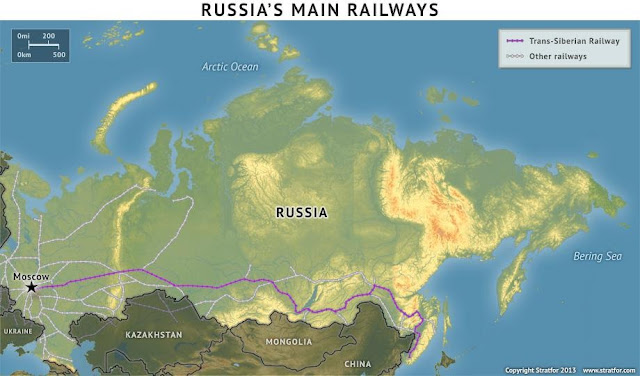 As Stafor reported none other than Russia is betting big on the key rail link connecting continental Europe with the Pacific: the Transiberian Ralway. The reason: rail-based transport between Asia and Europe is considerably cheaper than seaborne transit, and Russia's infrastructure investments could relieve economic pressure on European and Asian countries that are struggling to maintain current trade levels.

The Trans-Siberian Railway is capable of moving some 120 million tons of cargo each year, and around 13 percent of container trade between Europe and Asia utilizes the line. And if Putin has his way, which he will, there is much more to come - a recently approved $17 billion expansion of the 9,300-kilometer (roughly 5,800-mile) railway would add another 55 million tons of capacity by 2018 -- a 46 percent increase.

The railway expansion will be accompanied by several other infrastructure projects. According to Russian railway and port operator N-Trans, Russia will triple rail-to-port capacity in its Pacific coast terminals by 2020. In addition, the port at St. Petersburg is expanding by 44 percent, and German engineering giant Siemens signed a $3.2 billion deal in 2012 to supply 675 cargo electric locomotives to Russia.

In addition as we extensively covered previously - see The Silk Road - there is the alternate track from China through Kazakhstan (now part of the custom union) and a bridge to Western Europe Through Belarus and Poland.


Moscow has two goals in the railway expansion.
First, it hopes to boost its exports of raw commodities. Russia has become among the top oil producers and exporters in the world, and around 250,000 barrels of Russian oil is transported to Asia by rail each day -- an amount that could increase with the Trans-Siberian expansion. The coal industry too would rely on an expanded Trans-Siberian Railway for exports to Asia.
Second, and more important, the upgraded railway would also give Russia a more prominent role in trade between Europe and Asia.Currently, goods from Asia can reach Europe in roughly 10 days via the Trans-Siberian Railway. By comparison, seaborne goods from South Korea or Japan, for example, take around 28 days to reach Germany and 40 days to arrive in St. Petersburg. Moscow hopes the rail expansion will make overland transit through Russia even more attractive as an alternative to seaborne routes. 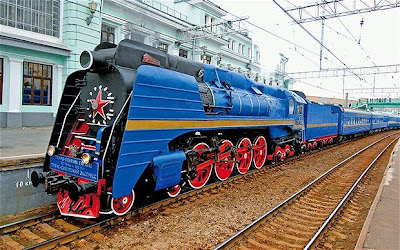