“Sentiment for gold is incredibly fragile at the moment,” writes UBS in Monday’s edition of its daily commodities note It may well be true, as UBS asserts, that “nervous investors are not getting the comfort that they used to get from physical markets.”

Indeed, as the bank writes, “Appetite from India has been quite unimpressive of late, although buyers did respond to last Friday’s selloff – our flows indicated above- average demand, but considering prices in rupee terms have fallen nearly 5% since the beginning of the year, the reaction was disappointing. That participants in China were out last week aggravated matters. Nervous investors did not get comfort that they used to get from physical markets. This week, though, investors in China return with a strong desire to pick up metal at cheaper prices, with turnover on the SGE surging to an all-time high of nearly 30 tonnes. This should help calm some of the uneasiness, but unless there is a strong fundamental upside catalyst, gold is likely to struggle and a move below $1600 could not be ruled out with certainty at this stage.”

Downward pressure in gold prices continued as very large funds liquidated substantial portions of their positions in the gold ETF (GLD). (See article.) Naturally, we need to look at the charts to give this story some context.

The daily chart shows that price has reached the bottom of the declining trend channel, the top of which is drawn from the October high. This was something we thought likely because price failed to reach the top of the channel before it started down again. Another important event that happened today was that the 50-EMA crossed down through the 200-EMA, signalling nominally that gold is in a long-term bear market. The same type of EMA crossover occurred back in May 2012, so, obviously, the "long-term" nature of the signal is not carved in stone, but it does set the tone for the gold market. 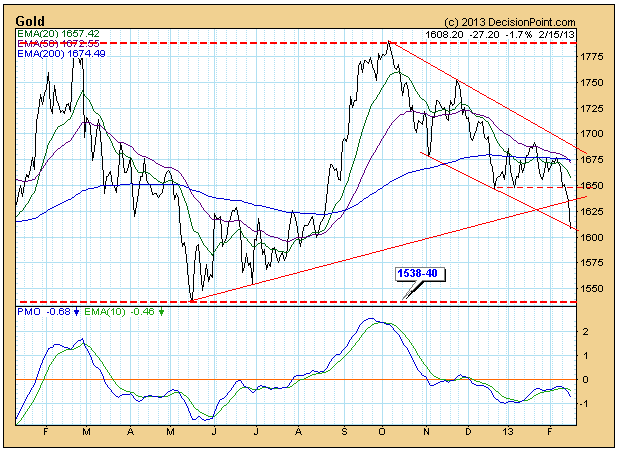 To more accurately assess the long-term picture we need to zoom back to the weekly chart. Here we see the +170% advance from the 2008 low. After the top in 2011, prices have been moving in a horizontal range between 1540 and 1800, in what we would call a high-level consolidation. This is also known as a continuation pattern, which implies that prices will eventually break out of the consolidation and continue higher. That is a nice scenario for gold bulls, but first it appears that prices will have to retest the support at 1540 at least one more time. Obviously, that is a critical support level. 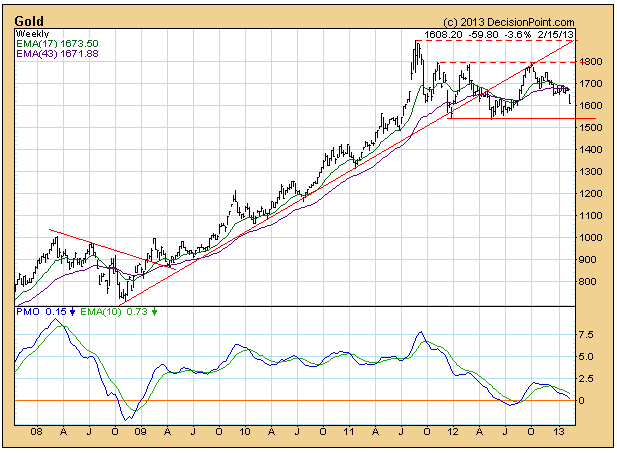 The most striking aspect of gold's behavior since the 2011 top, is that it is not following "the script", which is that the Fed printing press will drive gold prices higher. With the Fed printing money at unprecedented rates, why, we must ask, have gold prices stalled for almost a year-and-a-half? When our assumptions are not confirmed by actual price movement, we must reassess our assumptions. A possible alternative would be that the Fed's actions are not causing inflation, but deflation, at least in that part of the economy that affects gold prices.
The 7-year chart for gold shown below is very interesting and useful as it reveals that gold can drop back down as far as its lower supporting trendline and crucial strong support at and above $1500, without it even putting a dent in its long-term bullmarket. It is a strong buy as it approaches this support, and a stop can be placed just below it. A breach of this crucial strong support, which has generated 3 reversals to the upside over the past 18 months, would be a seriously negative technical development, which we would expect to be associated with a deflationary scare.

Conclusion: Gold could be in the process of consolidating a massive up move, and it is currently headed toward a retest of the bottom of the consolidation range at 1540. Failure of that support level would suggest that assumptions about the Fed causing inflation (and an increase in gold prices) should be questioned.
And Precious Metal Stocks ?
Our 6-year chart for the HUI index shows a massive completing Head-and-Shoulders top. We have observed this menacing pattern for some considerable time, but for a while thought it would abort because of the negative extremes of sentiment already afflicting the sector. However, we should recall from 2008 that sentiment can get even worse as prices plunge precipitously. The relative strength of the sector against the broad market in the recent past has been appalling, and this does not bode at all well for it in the event that the broad market goes into reverse as expected. 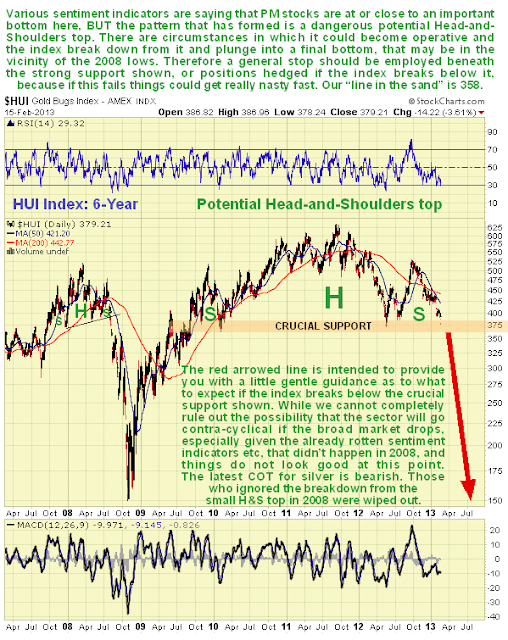 While we are aware that the sector could go contra-cyclical at any point, as it has traditionally done in the past, and we will always be on the lookout for signs of this happening, at this point it looks like it will be subject to a similar cycle of forced liquidation as in 2008. If the broad stockmarket reverses hard it looks likely that the HUI index will crash the crucial support at the lower boundary of the Head-and-Shoulders top pattern and plunge, with a probable downside target in the vicinity of the 2008 lows, and possibly lower. We keep a general stop at 358 on this index and will be out of all remaining holdings in the sector if this fails .
The great gold debate continues
The scariest thing about the markets is uncertainty. That’s why all investors crave knowledge — whether it’s fundamental, macroeconomic, or even technical. We need some type of compass to guide our trading and investing decisions. If we aren’t navigating with even a vague idea as to how things are going to play out, then what the hell are we doing throwing our money around in the first place?

Now, I’m not some lunatic who doesn’t understand the strong fundamental arguments backing gold. Rampant money printing and overseas demand are the first that come to mind. Both are valid points. But gold’s decade-long bull market has attracted more than a few momentum buyers. And like it or not, these weak hands are adding to the selling pressure.
Here’s what you have to do:
First, don’t get too hung up on the story right now. None of your arguments can change the price action.
Second, if you’re a long-term gold buyer, you have to understand just how important the $1,540 range has become over the past two years. This is gold’s price floor. A bounce higher from the $1,540s is the perfect long-term entry point.
However, if we see continued weakness at $1,540, all bets are off...