The conundrum is clear — the world’s leaders from G-7 to G-20 approve of policies to boost growth, while disapproving of policies to boost growth at the expense of others. So while currency manipulation is bad, zero rates and [quantitative easing] are good in times of trouble. And if those policies happen to cause a currency to weaken, well, that’s OK in the eyes of the G-20. - So it seems supported by Klugman on his blog 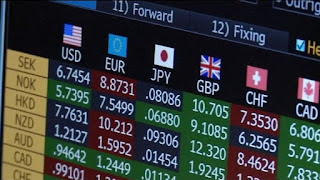 To us there is a serious intellectual error here, typical of much of the recent discussion of this issue. A currency war is by definition a low-level form of a trade war because currencies are internationally traded commodities. The intent (and there is much circumstantial evidence to suggest that Japan at least is acting with mercantilist intent, but that is another story for another day) is not relevant — currency depreciation is currency depreciation and still has the same effects on creditors and trade partners, whatever the claimed intent. The risks of disorder and disruption are still very real today.

Last two ran for 15 to 20 years
Jim Rickards, Pentagon advisor, investment banker and author of the famous book, Currency Wars, speaks with Jim Puplava o the Financial Sense Newshour to discuss the new age of global financial warfare and its potential outcome on savers and investors around the world.
TO LISTEN CLICK HERE

Currencies and global trade are zero-sum games
The immediate focus is on the antics in Japan, the world’s third largest economy, but it’s happening everywhere.If the Bank of Japan keeps printing money, the Nikkei will eventually hit 13,000. It may not happen by the end of next month, but it could happen by summer.  But these gains will come at the expense of other countries. If Japan’s currency becomes less expensive, another country’s currency rises in value. And if Japan’s exports increase, another country’s exports will plunge. Eventually, this other country may even decide to devalue its own currency to counter the damage caused by Japan.

On and on it Goes…
The current war began when the United States decided to print money to weaken the dollar. When the Fed first expanded this policy in March of 2009, it worked great. The U.S. dollar lost 12% of its value in just nine months. But by December, the dollar stopped falling ! The change began when the crisis in the European Union started pushing investors out of the euro and into the dollar.

Then, countries like Brazil began systemically weakening their own currencies against the dollar. By May of 2010, the dollar was back near the highs it hit during the financial crisis. Then, investors began speculating that the Fed would print more money. Two months later, Fed Chairman Ben Bernanke confirmed this. Brazil’s finance minister, Guido Mantega, then declared the world was now engaged in a full-blown currency war. And he was right. By April of 2011, the dollar was 16% off its June 2010 peak.

Today, the dollar is 10% higher than it was in 2010. Despite the Fed printing trillions… and government deficits exceeding 10% of GDP… the dollar never went back down. And with Japan’s latest moves, the dollar is destined to rise further.

And recently, French President Francois Hollande called for a weaker euro and urged the euro zone to set a medium-term target for the currency. Not long after, European Central Bank President Mario Draghi said the ECB was “monitoring” the recent rise of the euro currency.

A fool's game
The last thing was to expect that the G20 actually do anything to stop the currency wars from continuing. The meeting was bound to be highlighted by countries such as Brazil, India and China complaining that developed countries are all devaluing their currencies at once. Central banks around the world are making the mistake of printing cash since the currencies they manage aren’t devaluing against other fiat currencies.

Choose your side !
You see, newly printed bills add to the supply of cash on the market. And more money chasing a limited supply of resources will result in higher prices. What matters, though, is how these currencies devalue against commodities like gold and silver.

And considering gold and silver prices have been consolidating for more than a year and a half despite so much newly printed cash hitting the market, higher prices are right around the corner. 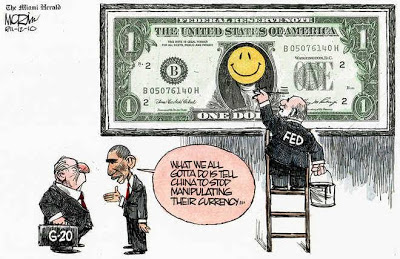 The meeting of G20 finance ministers and central bankers held in Moscow has issued a statement against competitive currency devaluations in the wake of growing concerns about the development of a “currency war”. However, the words contained in the G20 communiqué issued on Saturday will have virtually no impact on present policies.

The governments and central banks of the major economic powers will continue their own versions of “quantitative easing” (printing money), thereby working to drive down the value of their currency in international markets. The only stipulation from the G20 is that they do not actually say that is what they intend to do.

The finance ministers’ statement reiterated “our commitments to move more rapidly towards more market-determined exchange rate systems and exchange rate flexibility to reflect underlying fundamentals, and avoid persistent exchange rate misalignments.” It added: “We will refrain from competitive devaluation. We will not target our exchange rates for competitive purposes, will resist all forms of protectionism and keep our markets open.”

The key phrase is “for competitive purposes”. Provided countries say that increasing the money supply through central bank intervention in financial markets is aimed at boosting the domestic economy, then their actions will fall within the G20 guidelines. But the inevitable consequence of such action is to weaken the exchange rate of the given national currency in international markets.

The currency war issue occupied a central place on the G20 agenda in the wake of directives issued by the newly-elected Japanese government to the country’s central bank to boost the money supply in a bid to revive the stagnant economy. As a result, the yen has lost about 7 percent of its value this year.

Japanese ministers and government spokesman have openly talked about the need to bring down the value of the yen. In an interview on the eve of the G20, a close parliamentary ally of Prime Minister Shinzo Abe said it would be “appropriate” for the yen to trade at around 100 to the US dollar, compared to its present level of 93.

The tone for the G20 was set by the G-7 group of major powers, which issued a statement on the eve of the meeting warning against competitive devaluation. This was widely interpreted as being directed against Japan. But the G20 meeting did not want to issue a direct condemnation of Japan, lest this set off a broader conflict.

According to one financial analyst who spoke to Bloomberg, the message from the G20 is that while it will be “harder for the Japanese to talk down the yen … they will let their policies do the talking.”

The underlying cause of the currency conflict, however, is not the latest actions of the Japanese government but the “quantitative easing” program of the US Federal Reserve, which is printing money at the rate of $80 billion a month, or $1 trillion per year, through its bond purchases. 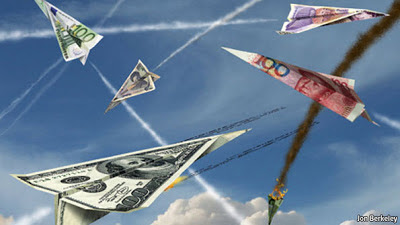 Federal Reserve chairman Ben Bernanke defended the policy at the Moscow meeting, saying that if it succeeded in stimulating domestic demand then “we are helping to strengthen the global economy as well.”

In fact the policy has nothing to do with boosting US economic growth but is aimed at providing ultra cheap money for the major banks as they seek profits through speculative operations on the financial markets. Far from strengthening the world economy, the Fed’s policy is creating growing economic tensions.

Because the dollar is the foundation of the international monetary system, the inevitable consequence of “quantitative easing” is to lower the value of the dollar in relation to other countries. This creates economic difficulties for US rivals both in export markets and in their domestic markets, due to the increased pressure of international competition.
Japan has been among those countries adversely affected. However, its program of lowering the value of the yen has impacted on its competitors, in particular South Korea. The head of South Korea’s central bank has warned that its future growth could be adversely affected.

The growing divergence between official stated policy and actual practice underscores warnings by Brazilian finance minister Guido Mategna, who first raised the danger of a currency war in 2010. “The currency war has become more explicit now because trade conflicts have become sharper,” he said in an interview. “Countries are trying to devalue their currencies because of falling global trade.”

These mounting problems were expressed in the latest growth figures showing that the US, Japan, Britain, and the eurozone all experienced economic contractions in the fourth quarter of last year. It is the worst result since 2009, the period immediately following the eruption of the global financial crisis.

The G20 meeting held in April 2009 was full of promises of coordinated action to stimulate the world economy. At the Moscow meeting, however, there was barely even pretence that such action would be taken. This was despite the fact that at least one-third of G20 countries are officially in recession. The communiqué simply said that “ambitious reforms and coordinated policies” were the key to achieving strong sustainable growth, without specifying what they might be.