Year of the Snake : Trust in Me 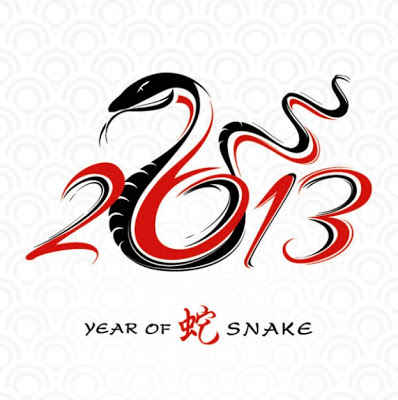 Starting the Year of the Water Snake in Chinese mythology let’s see what might be in store for the economy in this year of the Snake?
According to “feng shui experts”  the snake year will be a favorable one for industries related to “water, wood and metal elements,” including education, finance and insurance, media and metal and mineral-related businesses.

What to Expect in the Year of the Snake: Bite or Might?

Maybe both, if you follow CLSA’s Feng Shui Index. Every year since 1992, CLSA Asia-Pacific Markets team takes a lighthearted look at the fortunes that may befall the Hang Seng Index.

During the Year of the Dragon, CLSA’s predictions of the Hang Seng Index came amazingly close to how stocks actually performed. Equities in China fell into a bit of a slump toward the beginning of the year. Then the Dragon woke up and fired up the markets toward the latter half of the Chinese year.

Over the next several months CLSA foresees Chinese stocks to slink like a snake, rising in the beginning of the year before sidewinding in the latter half of the year. According to CLSA, the elements fall out of balance, as “the crucial Fire element all but dies away, Earth falls, Metal overshoots and Water puts a damper on prospects.” 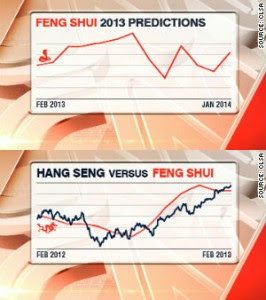 In times of growth, a young snake sheds its skin often, sloughing off a worn exterior to reveal a fresh layer of scales. The Asian giant has experienced growth the world has never seen before, and during the Year of the Snake, we look forward to seeing a new leadership take action, sloughing off worn policies to unveil a stronger vibrant economy.
Favorable Business (Earth, Metal, Water)


Not so lucky will be those in construction, property and telecommunications, according to the experts.
Unfavorable Businesses (Wood, Fire)
For branding purposes, blue is seen as the most favorable color as it represents the water element, while red and yellow are out since they stand for fire and earth, respectively.

The Year of the Snake ... Trust in Me

What will the Year of the Water Snake hold?

The previous Year of the Black Water Snake was in 1953, which was when China launched its first Five-Year Plan and the average annual income for a family in the US was about $4,000.

As the Dragon took its last breath of the year, it exhaled plenty of fire into China: Looking at year-over-year data as of the end of January, new bank loans, passenger car sales and exports all rose while inflation was slightly lower. Imports of key commodities we track, crude oil, aluminum and copper, were also exceptional, with month-over-month increases of 6 percent, 4 percent and 3 percent, respectively.

Increasing money supply and easing policy in China have also helped to breathe life back into China’s equity market. Below is an update of the chart we showed Investor Alert readers back in October when the venomous sentiment toward China was at extreme levels. We believed Chinese stocks were significantly undervalued compared to emerging markets and that its equities were due for a rebound. I indicated that an increase in money supply would be the needed oxygen for an equity resurgence. 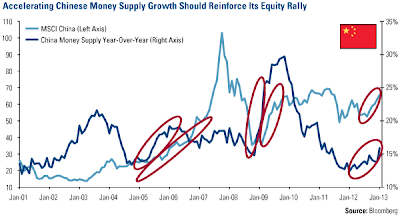 Over 2013, we expect the government to continue its accommodative efforts, which should reinforce the equity rally. In addition, the new pyramid of power is focused on growth, as it seeks to improve and reform policies that will provide its residents with opportunities and social security, increase incomes and raise standards of living, which should encourage domestic consumption.

Growth is set to be considerable over the next several years: Jefferies Equity Strategy team anticipates that China’s GDP will grow at a compound annual growth rate of 6.9 percent and by 2025, will almost equal that of the US.


The Chinese zodiac describes the snake as analytical, graceful and having a penchant for the finer things in life. While economic fragility and political gridlock are likely to be a thorn in the market’s side for some time, there are key factors to consider. There are signs that the hard landing will not be forthcoming, with the chinese equity market already discounting a far worse outlook than some of the economic data are suggesting.
We have seen purchasing managers’ index numbers for Chinese manufacturing hold above the expansionary 50 level, with a brief dip below in August and September before moving higher. Should the Chinese manufacturers continue to gain traction, we will see the positive effects of this recovery in the world’s second-biggest economy on commodity prices, construction and housing, with stronger global growth.
In addition, should China’s growth remain at about 7.5%, its emerging middle class will continue to gain momentum, urbanise and expand into an even stronger consumer force. The demand for luxury goods remained resilient throughout a tough year, particularly in economies such as China, and the manufacturers of these goods performed handsomely.
In the US, although the general health of the US consumer has continued to disappoint and unemployment showed only a slow improvement, there are some green shoots emerging. Construction and home sales are improving and point to growing demand in that sector. This could boost consumer health as houses tend to be the greatest creator of wealth for private individuals. If we witness the re-emergence of the US consumer, we will see the engine that drives more than 50% of the world’s largest economy start to accelerate.
The competitive commodity markets are going to be key in 2013. Although many mines have seen their margins diminished, value exists in the cyclical counters. With the profitability of some mines marginal at best, the viability of expanding existing production and bringing new assets online is small. The current environment is more conducive to mergers and acquisitions, and additional activity in this sector is possible, as it is more profitable than expansion. But with much of the pessimism surrounding global growth already baked into current commodity prices, the potential for surprise is to the upside.
With the continuing industrialisation of emerging economies, particularly China and India, combined with an awakened US consumer, a potent cocktail for a commodity rebound could be brewing in 2013.
After outperforming most other markets in 2012, we might find this a hard act to follow. With political machinations a constant sideshow, the drain of flaccid leadership and the hordes of unemployed youth, companies will need to stay nimble to generate earnings effectively. Cold, hard analysis of the current environment is warranted, with further cost-cutting measures likely. Should we continue to muddle our way forward, there is a real chance of further monetary loosening as growth continues to falter and competitiveness and productivity wane. A rebound in commodity prices will be a welcome catalyst for buying in our local resource stocks, which had a tough time this year.
Platinum miners, bedevilled by labour unrest and earnings pressure, offer a unique opportunity. The best companies in this sector, such as Anglo American Platinum and Impala Platinum, have worked hard this year to keep margin mines profitable and manage their labour forces effectively. The platinum price stands to benefit in 2013 as consumers, wanting the finer things in life, buy more platinum jewellery and acquire new cars (requiring catalytic converters). The continued supply constraints in the industry should underpin the metal, with higher prices possible.
All that glitter is not gold, but if it is platinum, it just might be better.