Buy The Dips, Sell The Rips :

This Will Be The Most Volatile Year For Gold

Beware of those who, like Dennis Gartman, are nervous nellies and bend in the wind, month by month, depending upon the fashion of the moment. The long term trend of upwards movement in the gold price is intact, reflecting ever cheapening currencies, loss of purchasing power, out of control government deficits. Those who trade in and out of the precious metals arena have to have impeccable timing to be successful, I am a believer in the long term trend.


The gold bull market will end when politicians adopt fiscal responsibility and the Fed stops printing money…. which means never! In the past we have had economic cycles in commodities related to the value of the dollar. Unfortunately for us, the game is serious now as money printing may not be an option now, but an ongoing requirement. How will US pay debt service on $16 trillion of debt when interest rates are 12%? By printing more money! Believing in the dollar will only see you lose much of your accumulated wealth through inflation. One would be wise to put one’s wealth into something of value now, before our inflationary episode takes off!

Although the yellow metal has been on a spectacular 11-year bull run, recent strength in the economy–or at least the rising likelihood that the Fed will not be as loose in its creation of liquidity–has some investors thinking gold’s heyday is over. Throughout gold’s decade-long rise, price action over the short-term has gone both ways. 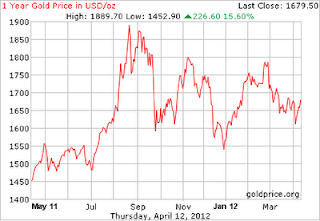 Over the last couple of years, gold’s precipitous, and continued, rise fueled causal theories, with some investors attributing it to U.S. dollar weakness, others to a safe haven trade in the face of widespread market turmoil, an inflation hedge, or whatever they could correlate a chart with.  The yellow metal, though, appears as a Humean experiment in causality, marrying no single trend.

Gold has fallen nearly 9% since late February, trading at $1,628.5 an ounce on Thursday in New York.  Gold went on a rollercoaster ride over the last 12 months, rising to an all-time high above $1,900 last spring, then tanking about 18% to December, then rising a further 15.5% to this February.

According to Gartman, gold’s latest price action confirms the trend line has clearly been broken, indicating we’ve been in a bear market for 12 months, since it peaked.  In Thursday’s Gartman Letter, “in retrospect it does appear that gold has not been in a bull market but has indeed been in a bear market” since August 2011, when it peaked above $1,900. “Since then,” he added “each new interim low has been lower and each new interim high has followed. How, we ask, had we missed that fact!”

The world has been experiencing the largest liquidity boom, as the central banks’ seven-month easing binge continues. Over this time, ISI counted 127 different stimulative policies, such as printing money, lowering interest rates and other easing measures, taken by governments around the world. The policy shifts helped carry the equity market a long way from the low on March 9, 2009. At the time, we noted in a special Investor Alert that there were significant government policy changes that signaled the market had hit rock bottom. According to USA Today, from the 2009 bottom through the end of the first quarter, the S&P 500 Index increased more than 100 percent. No wonder U.S. equity investors are singing.

However, the side effect of the abundance of printing by the central banks in the U.S., Europe, Japan and England has bloated balance sheets amounting to nearly $9 trillion. This is double the amount that it was three and a half years ago, says Ian McAvity in his recent Deliberations on World Markets, as the printing presses have pumped our monetary system full of liquidity. This is merely “kicking the can down the road,” as central banks will have to deal with the overhang later.

This has historically been a strong positive catalyst for gold. An analyst at the Economics and Finance Fanatic blog put together a visual that illustrates just how strong of a catalyst the nonstop printing of money is. The chart compares the U.S. adjusted monetary base since 1990 with the “surging” price of gold. As you can see below, the amount of money in the U.S. system climbed to extraordinary heights since 2008, with gold following the same path.

The economic challenges of the U.S. and eurozone “promise to be a prolonged one with sluggish economic growth,” says the blog, and easy monetary policies will likely be the remedy for awhile. I believe this provides a strong case that any pullback in the gold price appears to be a buying opportunity. Ian says, “Tax uncertainty, festering toxic debt that’s out there but out of sight and impossible debt service ability looming? I’ll stick with gold and sleep better at night.”

Investors might sleep better at night with an allocation to gold in the face of continued negative real interest rates. The chart below shows how gold has historically climbed when interest rates fell below zero percent, with a strong correlation from 1977-84, and again recently when rates turned negative in early 2008.

What would have to change to make me turn bearish? I believe the following three actions would need to be taken:

1. Real interest rates would have to increase 2 percent above the CPI in the U.S. and Europe

2. GDP per capita in Chindia would need to fall, negatively affecting the Love Trade

3. Substantial fiscal cuts would need to be made in entitlement programs in the U.S. and Europe

I believe there is a low probability of these events occurring any time soon. In this environment, gold should thrive.

Fed unwinding will definitely deal a deadly blow to gold bulls, so the real question investors should be asking is: are we out of the woods yet?

If the gradual pace of economic improvement in the U.S. and the relative calm of European markets persists, then the global economy might be close to the edge of those woods.  No QE3 and higher interest rates before late-2014 would cause further damage to gold, as it would signal an improving economic environment where capital should once again channel into productive, and thus riskier, assets.

With the Bernanke Fed guiding markets over the last couple of years, it should come as no surprise that gold prices are very sensitive to monetary policy.  Record low interest rates amid a weak global economy pushed nervous investors out of both risk assets and the safety of Treasuries.  A weak U.S. dollar, along with massive liquidity injections via QE, helped investors look to gold for it has always been: a store of value.

At this stage gold is set to continue being erratic in the immediate-term, relying on the economic expectations.  And the improving economic outlook does face substantial threats, though, particularly the European sovereign debt crisis (which promises to flare up again), which could stoke recessionary fears.  Add inflation, and you could see the yellow metal rally rise through the ashes like the phoenix.  At the end of the day, it all boils down to the true strength of the economic recovery.  Stay tuned !
Publié par claude@investlogic à 05:18