Perm’s Plackart, an innovative nanocoating asset of Russia’s largest nanotech company, Rusnano, has developed a project aimed at treating St. Petersburg’s numerous historic bridges with a new metalized anti-rust coating. The company says with this material the bridges will be much easier to operate over the next 15-20 years, saving the city up to 75% of current maintenance costs. 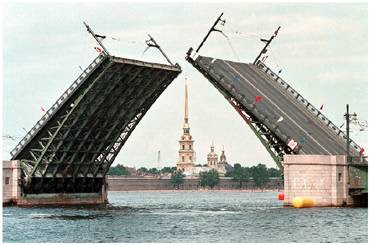 By May the firm’s St. Petersburg branch office wants to draft a project concept. If the city approves, the company says it will start by revamping the famous Dvortsovy (Palace) Bridge next to the Winter Palace, a drawbridge first built in the late 19th century and still containing original parts in its movable section. Plackart believes with the innovative coating the city wouldn’t have to buy new parts and could avoid a major pricey overhaul.

The project cost per bridge has yet to be determined. It will hinge on how many parts require repair. According to the firm, nanocoating one square meter of surface costs up to $50. To cut corners St. Petersburg could reject the nano and get Plackart to treat the bridges with an ordinary overlay—but that is assumed to compromise the lasting quality of work.

The bridges of an architectural gem

One of Europe’s most fascinating cities and an architectural pearl that UNESCO has put on its World Cultural Heritage list, St. Petersburg has more than 30 sizable historic bridges (not to mention many more petite ones) thrown across the Neva and its beautiful tributaries, such as the Fontanka, the Moika or the Griboyedov Canal. Most of them were built in the 18th-19th centuries, and some, like the illustrious Anichkov Bridge across the Fontanka, date back to the times of Empress Catherine the Great.

The 260-meter-long Dvortsovy Bridge Plackart wants to revamp first has been given three face-lifts over the past century, but many metal parts are excessively worn out.

Unlike many other nanocoating companies that find work with regional governments unprofitable, Plackart has reportedly partnered in bridge repair projects with municipal administrations in Omsk, Kurgan, Adler and Sochi, and some other Russian cities.

Its expertise is not entirely new to St. Petersburg, either; the firm says it has helped local Vodokanal to overhaul its water supply system. An authority in charge of the city’s bridge system has no experience using nanotechnology in anti-rust bridge maintenance but “is interested” in the idea.

Plackart hopes the authority will okay the project as the city is looking for good value for its money. For 2012, more than $33m has been allocated for an overhaul of St. Petersburg roads and bridges, of which about a million dollars will cover anti-corrosion measures.

Plackart is a $135m project launched two years ago with the sole focus of developing surface protection technologies, both conventional and nano-based, and offering innovative coating services. The start-up was co-financed by Russia’s Rusnano and another government-controlled company in charge of nuclear energy programs, Rosatom.

RUSNANO was established in March 2011 as an open joint-stock company through reorganization of state corporation Russian Corporation of Nanotechnologies. RUSNANO's mission is to develop the Russian nanotechnology industry through co-investment in nanotechnology projects with substantial economic potential or social benefit. The Government of the Russian Federation owns 100 percent of the shares in RUSNANO.

As of early March Russian state technology firm Rusnano is teaming up with a VC venture fund in a deal to invest around $760 million in a number of U.S. healthcare technology companies, establish a manufacturing facility in Russia and bring new drugs to the Russian market. As part of the deal, Rusnano and life sciences technologies investor Domain Associates are planning to co-invest in about 20 US-based healthcare technology companies . Rusnano will invest up to $330 million while Domain's venture capital funds and other investors will invest a like amount, the companies said.The remainder of the money will be used to establish a pharmaceutical and medical device manufacturing facility in Russia. At this facility, products will be manufactured that have been created by the companies the pair invest in.

Plackart is shooting for a significant increase in sales by 2015 to about $220m and is tapping international markets in the hope of exporting at least 10-15% of its products.