Our recommendations  at the beginning of this year  :

-Stay short YEN...this is a very crowded trade, but it still has legs. Short/medium term, at worst its the ideal funding currency, at best a great short - our long Rouble/short Yen trade is shooting the lights out. VERY HIGH CONVICTION.
-Stay long CNY - not at all crowded, will require much patience, but NDFs on Chinese Yuan (6X implicit leverage) should provide 15-25% per annum return with negligible risk. HIGH CONVICTION
-Stay small/moderate long EURO - or at least do not be short. The Euro does not want to tank despite all the advice it gets...MODERATE CONVICTION
-Stay long Nikkei. The weakening yen will help to reverse the long-term trend. Buy Nikkei Calls. HIGH/MODERATE CONVICTION.
-Long Chinese indices via Hong Kong ETFs HK 2828 or HK 2822. MODERATE CONVICTION.
-Bonds :
- Increase longs in Russian subordinated bank debt. Get it while it lasts - its the best mispricing I can find in EMD (the train is leaving the station as I write, but at YTM >7% (currently ~ 9.5%) they are a screaming buy HIGHEST POSSIBLE CONVICTION
-WINDIM - Stay long/increase. Other favourite trade, Wind has outperformed our wildest expectations - the 11.75s are now at 105, the sub-subs are at par. Still two-digit yields (barely) and will probably be called next year, but a good carry trade until then. HIGH CONVICTION

Just as the Japanese look to be finally weakening their stubborn yen and spur some inflation in a stagnant economy, there is a suggestion, just a suggestion mind, that a deliberate plan to scupper, or at least hinder, that plan might be afoot. 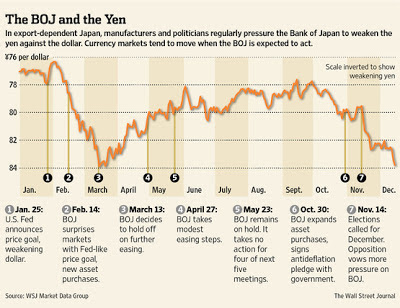 What if the Chinese decide to put some economic pressure on the Japanese over the Senkaku/Diaoyu islands issue that has been simmering away?
Tension between Asia’s largest and second-largest economies has been rising since the Japanese government infuriated Beijing in September by acquiring some of the islands from their private Japanese owner. And the FT reported on Friday that:

Japanese and Chinese fighter aircraft shadowed each other on Thursday in the vicinity of a group of the disputed Senkaku, or Diaoyu Islands, China’s Ministry of Defence said.
The action further escalated the territorial feud over the Japanese-held isl­ands in the East China Sea.

What if China decided to hit back a bit by putting pressure on the Japanese yen?
One Way Yen ?

The potential link between these political tensions and the performance of both the JPY [Japanese yen] and JGBs [Japanese government bonds] was made reasonably clear in September when Jin Baisong, from the Chinese Academy of International Trade, highlighted (in an article in China Daily) Japan’s reliance on funding from Beijing. He noted that China held short-term and long-term Japanese government bonds worth JPY 18 Trn by the end of 2011, an increase of 71% y/y. He argued: “Given these facts, Japan should reconsider its financial health. In other words, with Japan’s national debt at stake, the proverbial straw that can save the Japanese economy seems to be in the hands of China. And China can use it to find ways to impose sanctions on Japan in the most effective manner.” He added: “But instead of blindly boycotting Japanese goods, China should work out a comprehensive plan which should include imposition of sanctions and taking precautionary measures against any Japanese retaliation. China should also have several rounds of policies ready to undermine the Japanese economy at the least cost of Chinese enterprises.” [...]
It could be argued that such a policy would only reinforce the idea of an intense sell-off in the JPY. However, the problem for China in following such a policy would be that a weaker JPY is exactly what Tokyo is currently looking for. Given this it could therefore also be reasonably argued that a more effective way for Beijing to wage economic warfare at present would be to actually increase their purchases of JPY (and, of course, of JGBs) in order to undermine any chance of an export led recovery in Japan.
With tensions over the disputed Islands on the rise again (last week saw the Japanese government Japan summon the Chinese ambassador to protest four Chinese maritime surveillance ships that spent about 13 hours in waters near the islands), it’s entirely likely that debate on the different economic weapons available to China will re-emerge in the press of both nations in the near future. Signs of this debate were already becoming apparent on Friday when Prime Minister Shinzo Abe claimed Friday that China had deliberately targeted Japanese companies as part of a strategy to confront Japan over the territorial dispute.

The probability of China buying up yen and yen denominated assets to strengthen the currency might seem pretty low but it’s an interesting idea, particularly if splashy cash from the Bank of Japan makes its way into China’s reserves. Surely spinning them back into the yen would make sense? It’s not as if other countries aren’t taking action against the yen’s plunge.
And it’s not as if the Chinese aren’t full of jingo right now. 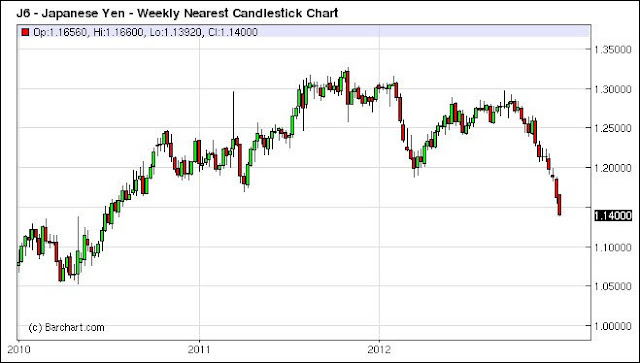 Just another cautionary note in this year of the supposed ‘one way yen’.