An update of our long wave cycle see Point Break

HOW DID THE GLOBAL ECONOMY GET HERE & WHERE IS IT HEADED?
The 14 Steps From Credit Expansion To Speculative Bust
An over-indebted, overcapacity economy cannot generate real expansion. It can only generate speculative asset bubbles that will implode, destroying the latest round of phantom collateral. The following clip succinctly links Charles Hugh-Smith's 14 points in the global endgame to the cycle of deflation from the business cycle, credit cycle, and more critically to the emerging version sought by our current slew of Central Bankers.

HOW THEY MAP TO THE CYCLE OF DEFLATION 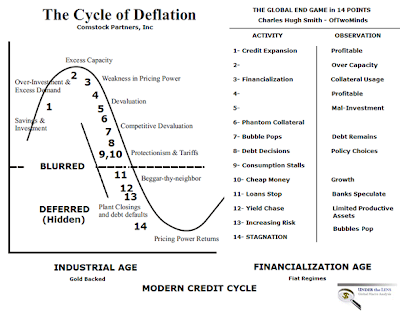 It probably comes as little shock to our readers when we say that the global economy is far from healthy. Indeed, between the European Union’s unemployment problem, global worries over “competitive devaluation,” debt monetization, and uneasy political alliances, economic analysts the world over will tell you the same thing.

So this raises the big question: How are the world’s money leaders (i.e. central bankers) handling things? Where is this all headed? Charles Hugh Smith (of Of Two Minds fame) weighs in on the matter: “An over-indebted, overcapacity economy cannot generate real expansion. It can only generate speculative asset bubbles that will implode, destroying the latest round of phantom collateral.”
Smith, who has been closely following global events and trends, presents fourteen points summarizing his recent work on what he refers to as the “global endgame” [all block quotes via Of Two Minds]:


As credit continues to expand, competitors can easily borrow the capital needed to push into every profitable sector. Expanding production leads to overcapacity, falling profit margins and stagnant wages across the entire economy.


Resources (oil, copper, etc.) may command higher prices, raising the input costs of production and the price the consumer pays. These higher prices are negative in that they reduce disposable income while creating no added value.

3. People Turn From Material Investment to Financial Speculation
As investing in material production yields diminishing returns, capital flows into financial speculation, i.e. financialization, which generates profits from rapidly expanding credit and leverage that is backed by either phantom collateral or claims against risky counterparties or future productivity.
In other words, financialization is untethered from the real economy of producing goods and services.

4. Financial Speculation Is Profitable – At First
Initially, financialization generates enormous profits as credit and leverage are extended first to the creditworthy borrowers and then to marginal borrowers.

6. Credit Continues to Expand
These asset bubbles create phantom collateral which is then leveraged into even greater credit expansion. The housing bubble and home-equity extraction are prime examples of this dynamic.

7. Credit Bubble Burst
The speculative credit-based bubble implodes, revealing the collateral as phantom and removing the foundation of future borrowing. Borrowers’ assets vanish but their debt remains to be paid.

8. Who’s Going To Pay Back Their Debts (Hint: Not Many)
Since financialization extended credit to marginal borrowers (households, enterprises, governments), much of the outstanding debt is impaired: it cannot and will not be paid back. That leaves the lenders and their enabling Central Banks/States three choices:
A. The debt must be paid with vastly depreciated currency to preserve the appearance that it has been paid back.
B. The debt must be refinanced to preserve the illusion that it can and will be paid back at some later date.
C. The debt must be renounced, written down or written off and any remaining collateral liquidated.

9. Consumption Has a Bit of a Problem
Since wages have long been stagnant and the bubble-era debt must still be serviced, there is little non-speculative surplus income to drive more consumption.

10. So How Do Central Banks Respond?
In a desperate attempt to rekindle another cycle of credit/collateral expansion, Central Banks lower the yield on cash capital (savings) to near-zero and unleash wave after wave of essentially “free money” credit into the banking sector.

11. Where Do Banks Turn Their Attention?
Since wages remain stagnant and creditworthy borrowers are scarce, banks have few places to make safe loans. The lower-risk strategy is to use the central bank funds to speculate in “risk-on” assets such as stocks, corporate bonds and real estate.

12. Debt Continues to Eat Away At Income/Assets
In a low-growth economy burdened with overcapacity in virtually every sector, all this debt-money is once again chasing a limited pool of productive assets/income streams.

13. Where Do You Think That Leads?
This drives returns to near-zero while at the same time increasing the risk that the resulting asset bubbles will once again implode.

14. Endgame?
As a result, total credit owed [remains] high even as wages remain stagnant, along with the rest of the real economy. Credit growth falls, along with the velocity of money, as the central bank-issued credit (and the gains from the latest central-bank inflated asset bubbles) pools up in investment banks, hedge funds and corporations.


Is the Secular Bear Market Coming to an end ?
I suspect we are in for a harder long-term slog than the mere 3 year Bear market suggests.
Historically, this suggests an extended period of range bound trading as the highest probability long-term scenario in my view. I expect vicious rallies, and wicked sell-offs to occur — over shorter term cycles — within the larger timeline. Active management and capital preservation are going to be the key methods of outperformance. Let’s put this into more specific quantitative terms. According to data from Fidelity:Average secular bull market lasted 21.2 years and produced a total return of 17.2% in nominal terms and 15.9% in real terms. The market’s P/E more or less doubled, from 10.1 at the start to 20.5 at the end.


Here we are, a few weeks away from the start of the 14th year of the secular Bear market that began March 2000. The question on more than a few peoples’ minds has been whether or not it is reaching its end.
To answer that question, we need to understand exactly what a secular bear market is. 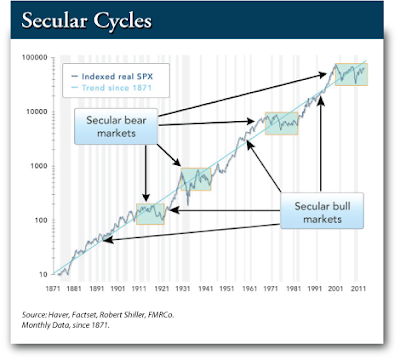 A Secular Bear Market is a long term cycle which typically begins after a long term bull market peak and crash. It is primarily characterized by strong, even excessive rallies and selloffs, all occurring within a broad trading range. Despite the strong rallies, markets often appear to be unchanged a decade or so into secular bears.
The psychology is one of compressing Price to Earnings multiples, as investors become increasingly unwilling to pay the same price for each dollar of earnings. There is often a general malaise to the broader society, sometimes encompassing political scandals and/or war.

On Main Street, there is a general disinterest in equities. Ratings for financial television and other media fall. Interest in non stock investments — especially Bonds, Commodities and Real Estate — rise.

To conclude that the Secular Bear is ongoing, we need to see a few factors:

Some of the answers to these questions are purely quantitative, and do not require any human judgment. A few of these do require a squishier answer. After 36 months or so of capital outflows from equity funds, we should not rush to judgment after the first month of inflows.
And there is a major caveat to this: The Fed’s extraordinary ZIRP/QE intervention creates an impression of inorganic gains. Without the unprecedented FOMC actions, I am unsure markets would be anywhere near current levels.

Regardless of your answer to our broad question, there is one thing that I believe to be clear: We are much closer to the end of this secular cycle than to the beginning. Many optimists — most notably, famed technician Ralph Acampora — believe the secular bear market has ended. Even skeptics have to agree that we are more likely in the 7th or 8th inning than earlier stages of the game. Only the “America is Japan” crowd thinks we are in the 3rd or 4th inning.

The key question for investors: Are you prepared to make changes to your portfolios?