Vlad ? The Washing Machine Is Broken

After Lehman, after Ireland and Iceland, and after Greece, I think you must have lived in a cave for the past 5 years to really think that banks are safe because they are guaranteed by their governments. Come on! Please get real. 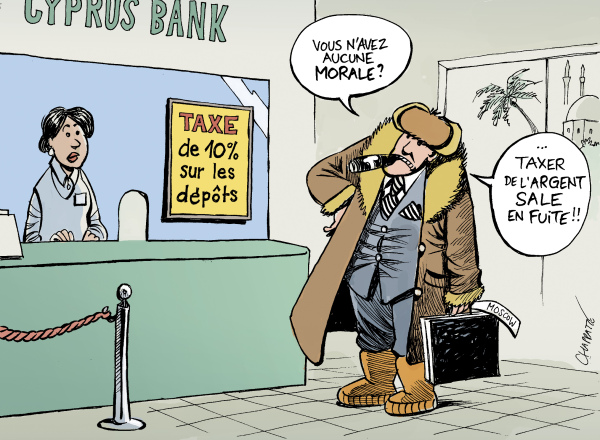 To tax dirty running money...? You don't have any moral left !
If you are a depositor in a Cypriot bank, whether of deposits of more or less than €100,000, who did you think was guaranteeing your deposit? The Blue Fairy? Did you really think that in such a small place with such a bizarrely bloated banking system – one that for years and, by now, very publicly had been investing in Greek government bonds! – your government had the resources to protect all depositors? The bailout of Cyprus’ two largest banks will cost the equivalent of 60% of GDP! And after what happened in Greece, did you really think that the Germans were willing to cover the whole bill?
Mohamed El-Erian manages to write about this thing, without so much as mentioning the Russian thing.
I, too, was shocked yesterday morning. Not so much by the news that depositors at Cypriot banks would face a haircut, or a ‘levy’ or a ‘tax’, on their deposits as a contribution to yet another Eurozone bailout package funded by taxpayers in other counties but by the reaction in the press. Here was, according to the majority of the international commentariat, yet another example of the ineptitude or outright meanspiritedness of the Eurozone policy elite, another example of imposing needless and counterproductive hardship and brutal ‘austerity’ on innocent citizens in small and troubled countries. The Daily Telegraph on its front page spoke in usual hyperbole of a ‘EU raid on savings’ and, naturally, of another ‘threat to the recovery’. What agitated most commentators was that the ‘sanctity’ of deposit insurance had been carelessly violated as even deposits of less than €100,000 were, at first at least, supposed to be subjected to a reduced haircut as well. Those types of deposits are supposed to enjoy a ‘guarantee’ that magically shields them from the harsh reality of bankrupt banks and bankrupt states. Undermining this ‘guarantee’ could have wide-reaching consequences beyond tiny Cyprus as it has the potential to undermine the trust in banking system in Greece, Spain and Portugal.
I agree that this move is risky. The international banking system is highly levered and in large parts has been teetering on the brink of disaster for many years. Anything that affects depositors can have grave consequences.


The entire nation could be bailed out several times over without imposing any serious costs on its partners in the single currency.

In that sense, the decision was a “Lehman moment” for the markets. Why? Because when the U.S. authorities were faced with the choice of bailing out the Wall Street bank in 2008, they decided it was not worth the moral hazard involved. They reckoned it was better to let it go bust than allow a bunch of wild, over-paid investment bankers to pass their losses onto the state.

As it turned out, that was a big mistake. After Lehman, we had the credit crunch, and a five-year global depression. If the clock could be re-wound, there is no doubt those same regulators and politicians would give Lehman the few billion it needed to stay afloat. It would have been cheap at any price.

Likewise, Germany and France decided it was better to impose some costs on bank creditors than let them think they could get bailed-out for nothing. The trouble is, euro-zone finance ministers have no grasp of how the markets work. They have not understood how interconnected they have become, or how relatively small events can have big consequences if they send out the wrong signals.

Now they have made it clear that no bank deposit in the euro zone is safe, and they shouldn’t be surprised if money starts to leave the continent. They might be backpedaling furiously now, looking at ways to protect small savers. But the damage has been done.

If the officials running the euro zone can’t get to grips with how markets work, the bull market is not going to get any traction. The world economy may well steadily improve, employment will rise, debt may come down, and corporate profits power ahead. But the euro zone will keep chucking Lehmans into the mix.

Every time equity markets start to rise, there will be another catastrophe in Europe and they will start to wobble again.

But given the state of affairs, any meaningful attempt to deal with the banking systems’ problems must inevitably entail risks. The questions are the following: Are the right type of risks being taken? And what would the alternative be?

Banking is a risky business because banks are highly leveraged enterprises. (Sorry to break that news to you.) In a fractional-reserve banking system ‘deposits’ are not deposits (i.e. contracts for safe-keeping) but loans to banks and thus loans to highly leveraged businesses.

Most people in developed countries have become used to not worrying about the health of individual banks. They have, over the course of decades, been conditioned to believe that all banks are regulated by the state and ultimately protected by the state. – Yes, but only so that the banks can take even more risks and become even more leveraged. State ‘protection’ has now created a banking monster that is swallowing up the resources of the state itself. And this can hardly come as a shock surprise in early 2013!
The naïve believe that bank deposits are always ‘money good’ because they are backed by the state and the state, after all, is an endless cornucopia, was maybe understandable, or at least excusable, until about 2008, when then Prime Minister of Ireland, Brian Cowen, in the middle of the Irish banking crisis, had the genius idea to simply declare a state guarantee for all deposits at Irish banks. Hey, problem solved! Obviously, Cowen didn’t do the math and didn’t realize how big that guarantee was going to be. Well, he was found out by the markets – and Ireland, the country, went bankrupt. 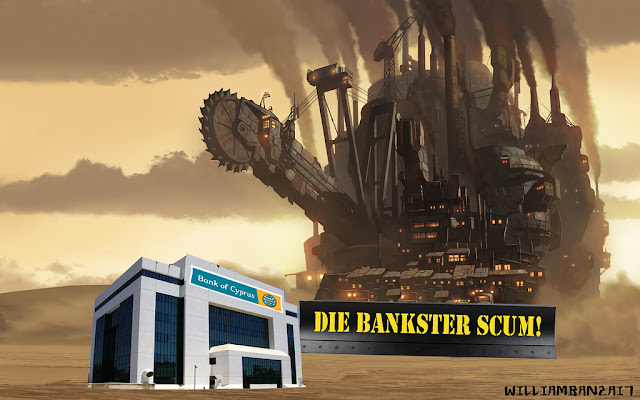 "Those who are unaware they are walking in darkness, will never seek the light."--Bruce Lee
Publié par claude@investlogic à 03:05