Finance capitalism is fatally flawed in theory and in practice. The base imperative of finance capitalism today is infinitely expanding (private) debt—it is the source of its political and economic power. Its ultimate product is that which is before us: a global plutocracy dependent on state capture, power and control to plunder and loot what will become, by necessity, increasingly resistant populations. The post-War ‘moderation’ cited by mainstream economists worked to the extent it did by limiting private debt creation. 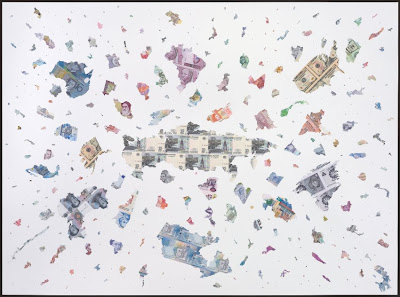 a bigger bank by justine smith
Cyprus and the rest of the European periphery face the complicating factor of having given up their own currencies to belong to the European Currency Union. This likely means the European Union will, in fits and starts and in various configurations, eventually unwind. But the other problem of predatory and extractive global finance capitalism will continue until it is brought down. Mainstream economists will eventually get their incremental reforms as ongoing and new crises erupt. But again, what is the rationale for ‘managing’ an economic system whose fundamental premise is that it works best when it is left unmanaged?
In Europe as well as in the U.S. much of the rising ‘sovereign’ debt behind calls for fiscal austerity derive from governments shifting bank liabilities onto public balance sheets. Three billion euro of Cyprus’ ‘public’ debt reportedly came from its contribution to the ECB’s ‘bailout’ of Greece that in fact went to pay European banks and Western hedge funds for ‘investments’ they had made in Greek government bonds. The U.S. has been more successful than Europe in hiding bank bailout costs that will ultimately wind up on the public’s balance sheet through residual New Deal programs that make good hiding places to stash bogus bank assets.
Through the banks directly and through the ‘shadow banking system’ private credit has grown exponentially in recent decades and it has circled the globe at increasing speed. The ‘excess savings’ view of global investment hides the role of Wall Street in the creation and distribution of credit.  So banks both create money through credit finance and the financial products to be bought with the money thus created—literally a license to print money. And both the creation of credit and the production and distribution of garbage financial products pay bankers extremely well while coincidentally increasing the risk of economic catastrophe through cash-flow leverage now distributed globally. 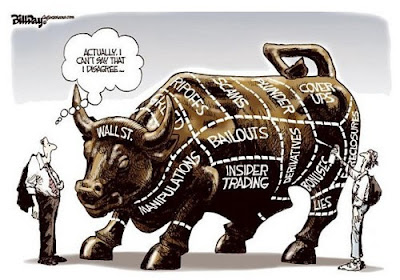 Most fundamentally, re-implementing capital controls, the ‘excess savings’ school’s solution to managing capital flows, and re-regulating banks and bankers, the managed neo-liberal solution, both look past the coordination problem fundamental to capitalism.
The base rationale for capitalism is that individuals and capitalist enterprises acting independently in their own interests produce the best possible aggregate outcomes. The removal of capital controls did precede the spate of economic debacles tied to global finance and so did de-regulation of the banks. However, re-implementation of capital controls and re-regulation of the banks, were they to occur (Dodd – Frank is ineffective), are de facto evidence individuals and enterprises acting in their own interests do not produce good aggregate outcomes. Why then retain the ‘capitalism’ of ‘managed-capitalism’ when its most fundamental premises are contradicted by the fact that social welfare is made to suffer if the social welfare considerations behind the ‘management’ of capitalism aren’t pushed to the fore?
Put another way, what better system could be conceived to loot and plunder the globe than that where bankers get to create credit and also the financial products representing claims on ‘real’ assets that can be bought with it?
Currently hedge funds in the U.S. are buying bulk houses at pennies on the dollar because private (bank) credit was used to inflate house prices in a credit-fueled boom that went bust. Foreclosed upon home ‘owners’ still owe tens of billions to the banks even though their houses are long gone and the bulk house purchases will be leveraged (using bank credit) to cash the hedge fund investors out and residual value will be sold to shadow banks that have created ‘cash-flow’ economics that depend more on low funding costs and continuing credit expansion than on the values of the underlying houses. And this same dynamic is playing out with ‘state’ assets across peripheral Europe as economies are crashed by bankers (with the help of Central Banks and state actors) and assets are purchased at pennies on the dollar against captive cash flows (think public water and power systems).
But to be clear, this system is also in fair measure just random destruction, not a brilliant conspiracy. As the consolidation of wealth around finance capital demonstrates, there are clear ways for small groups of connected insiders to benefit from economic looting and plunder. But the coordination problem (long understood by capitalist economists before the rise of neo-liberalism) is both fundamental to capitalist production and, to the extent outcomes result from an absence of information rather than planned looting, random within the system itself.
The Asian currency crises of the mid-late 1990s resulted from multiple independent ‘money managers’ deciding at the same time to ‘invest’ in economies with limited capacity to put it to profitable use in capitalist production. The ‘coordination’ issue is that had these money managers known the amount of money they were collectively intending to invest relative to the amount that could be absorbed they could in theory have made the decision to put the money that couldn’t be put to ‘good’ use elsewhere– but they didn’t know.  The result was over-investment, with money dumped into many projects that served no useful role in ‘the economy.’ Once it was understood that over-investment had resulted in (caused) mal-investment the money that remained was quickly removed leaving smoldering carcasses where functioning, if less ‘rich’ in Western terms, indigenous economies had previously existed.