Why You Should Worry About Inflation
in the Developing Economies

China’s consumer price index rose more than expected in April, while wholesale prices suffered a steeper fall. The April CPI showed a gain of 2.4% from a year earlier, led by a 4% rise in food prices, the National Bureau of Statistics said Thursday.The producer price index, meanwhile, fell by the most since October, dropping 2.6% against a decline of 1.9% in March.
Investors in local currency emerging market bonds should recognize the threat of inflation and consider protecting themselves against it.
While it is difficult to believe that inflation will be much of a problem in the Advanced Economies (AEs) over the next several years, there are reasons to worry about inflation in the Developing Economies (DEs). This should be of particular concern to those contemplating investments in emerging market local currency bonds.

The threat reflects a number of factors:

While there are obviously individual countries in the developing world that boast low to moderate inflation, consumer prices generally rose quite quickly in the DEs last year. Prices rose 4.5% in Developing Asia, 5.8% in Central and Eastern Europe, 6.0% in Latin America and 10.7% in the Middle East and North Africa.1 Moreover, the numbers were not overly distorted by extreme outliers (one country experiencing hyper-inflation and thus distorting the average) as the median inflation rate in the DEs was 4.9%.

The relatively poor inflation performance in the DEs is not new. Indeed, over the last 10 years, consumer prices have risen at an average annual rate of 6.4%. Such a protracted period of relatively high inflation affects inflationary expectations, effectively embedding them into the wage bargaining and producer pricing processes. Until these expectations unwind, policy makers will find it difficult to lower inflation.

The DEs have grown relatively robustly during the global recovery. Using the IMF’s purchasing power parity aggregates, real GDP has grown at an average annual rate of 6.3% over the last three years, and while it slipped to 5.1% last year, it is projected to reaccelerate by about 0.2 percentage point to 5.3% this year.1 The speed and persistence of growth suggests that output gaps have already narrowed and will narrow further this year, posing an upside risk to inflation.

The CPI is often disaggregated into food, energy and core. In AEs, food and energy typically obtain weights of around 15.0% and 7.0%, respectively, leaving the core index at around 78.0%. However, in DEs, food can obtain a weight of 50.0%, and energy of 20.0%, leaving core at just 30.0%. Given that the price of food, and particularly energy, are heavily influenced by global as well as domestic economic and other conditions, policy makers in DEs have a much more difficult task controlling inflation. Moreover, given the capacity for large and sudden swings in food and energy prices, headline inflation is inherently volatile in the DEs.

Although some countries such as China, are attempting to become more balanced, DEs typically depend on exports to drive growth. Hence they fret about international competiveness. Given the extremely accommodative monetary stance of the AEs, the DEs are currently apt to keep monetary policy easier than domestic economic conditions would otherwise dictate in order to prevent exchange rate appreciation and the associated loss of export competitiveness. (That partly explains why the recent policy moves by Japan were met with such hostility.) India seems to provide a good example of this phenomenon, as the Reserve Bank cut its key policy rate 100 basis points over the last year despite a CPI inflation rate of 10.4%.

In summary, investors in local currency emerging market bonds should recognize the threat of inflation and consider protecting themselves against it.

"Real" Inflation in the US

P.S. To have a broad picture citing The Economist's Big Mac index, Peter Schiff says real inflation has been understated since the government started adjusting the way inflation was measured in the early 2000s. Since 2002 the Big Mac has risen in price at nearly three times the rate of overall inflation. 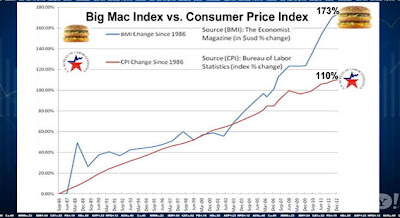