Bad Money drives out good money.
Bad money is driving up shares and good money is going to gold... could be the short version of Gresham's Law. What it really means is that people interested in self-preservation don't follow trends. When inflation runs amok in financial markets or in the economy, prudent people tend to hoard what's valuable. They spend what's less valuable before it becomes even more devalued (paper money).
What exactly do we mean?
Gold holdings by exchange-traded funds and products declined by 16% in the first quarter, according to Bloomberg. The institutional side of the gold picture is getting easier to understand: sell gold and buy stocks.


The important point to make is that front running the money printers is just a form of Gresham's Law. You're not investing any more. You're betting on higher asset prices. That bet doesn't have anything to with the value of securities. But if it's a bet on the direction of asset prices, it doesn't have to.
Everyone's joining in on the bet now. That's one way of looking at daily all-time highs on the S&P 500 and gold retesting levels it last saw in February of 2011. Stocks aren't money of course. But then, the ETF aren't gold either.
Anyone who bought gold through an ETF in the last two years was betting on rising gold prices. That looks like a bad bet now. A stronger US Dollar (relative to the other fiat currencies) caps the gold price.But the Tepper trade is now being taken up by all institutional traders and investors. The ETF made it easy for the institutions to buy gold. But they've also made it easier to sell it. 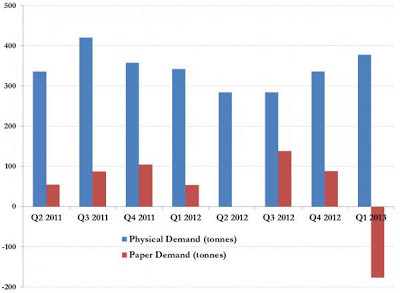 Let's be clear though. If the exchange-traded gold funds are facing redemptions, all they're really redeeming is units of the E.T.F. People sell those units for cash, not gold. The trust sells the gold to raise the cash. What's really worth paying attention to is who buys the gold at E.T.F. sells.


Right now, all the buying is on the retail side. Institutions have to chase returns. That's what makes them trend followers, inherently. Retail investors are not compelled to be blind trend followers. 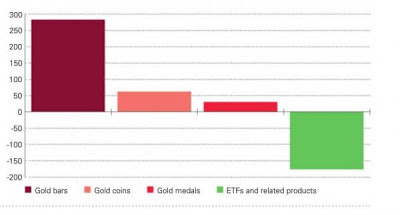 When you're managing your own money, you have the luxury of independent thought. You make decisions based on what's best for your wealth in the long-term, not what your returns will be this quarter. In Hong Kong, retail gold buyers are thinking that they're happy to buy physical gold at these prices, even if it means paying a premium over the spot price.
Right now, the institutional selling outweighs the retail buying. There are more sellers than buyers. But the sellers are selling in order to make a bet. The buyers are buying in order to convert their savings into sound money. Either that, or the buyers are morons and the sellers are savvy.

Thus far, central bankers, led by Ben Bernanke, have pulled off the ultimate feat. They have served up just the right amount of monetary stimulus which has given us this ‘Goldilocks’ recovery in which the forces of inflation and deflation are canceling each other out. Ultimately these efforts to maintain our broken monetary system will manifest in a currency crisis and it is then that money will flee from low yielding debt instruments into hard assets such as gold and silver (and stocks).

Gold investors will have their day, but the “great reset” may be postponed for a lot longer than most people (ourselves included) thought possible.

Physical gold that’s held outside the banking system still plays an important role in investors’ portfolios. In the meantime however, investors should look to take advantage of a macro environment that is bullish for equities. Low inflation, central bank support and relatively robust economic data have created a Goldilocks scenario for equities.

When fixed income, which is the world’s largest asset class, is yielding almost nothing, it has a significant impact on other asset classes since money goes in search of returns elsewhere. In fact, as noted recently central banks are also now buying equities for this very reason.

All of this is why we continue to hold gold but have also increased our exposure to stocks (particularly dividend paying blue chips; in order to make hay while the sun shines.
There is a philosophical issue buried in here somewhere too : "Gold is the corpse of value." It's a way of freezing your purchasing power in a bar of inert metal in order to liquefy it later when the world is safer. Gold is value in suspended animation.