The “Russia Calling!” Investment Forum provides a platform for developing dialogue between Russian business and the international investment community. Prominent political and business community figures from around the world are taking part in the event. The forum is examining development trends in the Russian and global economies and the state’s role in an investment model for growth.
This year  winter came early over the Russian Capital with light snow showers in this begining October. Sitting here in the 12th floor in a tower in Moscow looking down on a cold, wet and white city.. It's definitely sad.
The first flakes are unmistakable. They don't fall like the fluffy white powder of December, so much as slap you in the face with the full force of October's wet promise of the six months of gloom that lie ahead. So it was at 11.30am on Tuesday. The immediate response is confusion – why is my coat turning white? Then comes denial – is it just oddly coloured rain? And finally, acceptance – here we go again.
Winter is, of course, Moscow's natural state. The slightest hint of frost brings Russians fumbling for their furs, checking skating rink schedules, ensuring soup ingredients are in full stock. And yet there are constant attempts to challenge its inevitable path.
And it is the same for the general state of the economy and the Russian situation the later months. We can only hope that Christmas is getting closer. 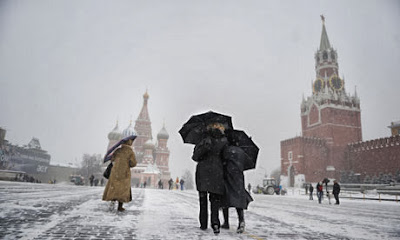 Opening the forum, Economic Development Minister Alexey Ulyukaev said that being there reminded him of an old joke that says: We don't have culture, but we do have a Culture Minister, and he feels really well!
"Practically, there is no economic development [in Russia]," Ulyukaev said, paraphrasing the joke, "but the Economic Development Minister is here, in front of you!" But unlike the minister in the joke, he is feeling poorly, Ulyukaev added.

Ulyukaev is one of those Russians that match perfectly the American idea of the Russian archetype. The man’s a bear with short, gray-spiked hair. In the three years I’ve been coming to Russia Calling!, I’ve never once seen him smile. 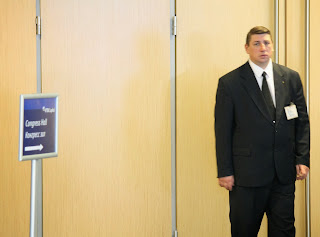 The morning sessions were full, and every door was guarded by a stone faced bouncer.
It seemed the size of his arms reflected the degree of importance of the attendees.


A take it away economy

Perhaps he has a reason. Foreign direct investment into Russia, the measure of foreign capital coming from corporates and portfolio flow, has gone from $74.7 billion in 2008 to $51.4 billion in 2012. That’s down from $55 billion in 2011, according to the International Monetary Fund.

“There is a very low participation of private Russian capital in our economy,” said Alexei Moiseev, the Deputy Finance Minister. “It resembles an old Soviet left over. I know a lot of people in the government would disagree with me. The truth is, we are aware of this problem and are doing something about it.”
Creating investing rules that are in accordance with that of the Organization of Economic Cooperation and Development is a starting point.

Let’s not forget, Russian capitalism is only 21 years old. If you start with the dissolution of the Soviet Union in January 1992 (officially was Dec. 26, 1991) as the start of Western-style economic practices being incorporated in the Russian economy, then you’ve got a capitalist system that turns 22 the day after Christmas 2013.  To use a drinking metaphor, by U.S. standards Russia is one year in to being legally able to handle its liquor. Bottom’s up. 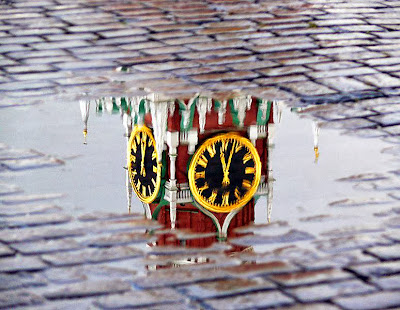 The macro view of Russia is a mixed bag. The investment view is a bag full of holes .

“We’re now trapped in an intermediate level of development,” said Moiseev. “This is not a cyclical slowdown in Russia. This is a structural one and it concerns us all.”

Last year, the Russian government spent around $1 billion on the world’s longest suspension bridge in Vladivostok, the peninsula that juts into the Sea of Japan. The Russky Island Bridge was built to help Russia tend to a number of big events happening in the east, like the Asia-Pacific Community Summit.
Russia has the Sochi Olympics to tend to this coming winter.

The Sochi airport terminal, which is expected to cater to 3,800 passengers an hour during the Olympics, is undergoing renovations to the tune of around $200 million. Basel Aero is doing the work, a company owned by metals tycoon.

Russia launched a new investment strategy for civil aviation this year. The investment volume is estimated at $9 billion, with over 100 sites currently undergoing reconstruction and modernization with help from both the private and public sector.

If Russia can sell itself better — never an easy task for an amateur at 22 years of age — then more institutional money will flow. New policies will liberate big investors like pension funds to invest long term. It’s not going to happen over night, but neither did China’s move from $2 a day laborers pouring cement in Shanghai, to $50,000 a year Shanghai one-percenters shopping at Huang Shu Chi in Xintiandi.

The United Arab Emirates is taking note. The Abu Dhabi Department of Finance, the capital city’s long term investment vehicle, said last month it will invest $5 billion in Russian infrastructure projects over the next seven years.

Why Russia Is 'China In Reverse'

One of the Conference theme was that the actual situation of the Russian economy is the reverse of what the Chine has been implementing. 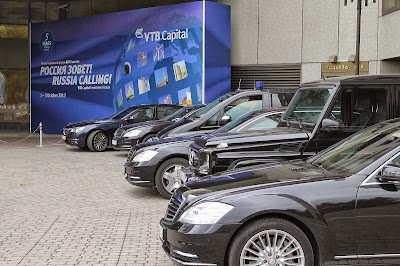