At Russia Calling two years ago, Putin summed up Russian society in a sentence. He said the country has faced economic disasters many times and always came back.  Russia is always waiting for the worse to happen.  One of the reasons Putin is in power is because he’s basically made a promise never to take Russia over the edge again.


That the worst is happening next door in Europe, and farther away in the U.S., doesn’t help.  The investment sentiment of wealthy Russians is in decline. There’s a lot of wealth in Russia, but on balance, those with money are not putting it to work.
This year President Vladimir Putin to the usual standing-room-only crowd at Russia Calling said “Our problem is that we are not efficient, our economy is as big as Germany’s. Our per capita income is as high as some European countries. But the good news stops there.” 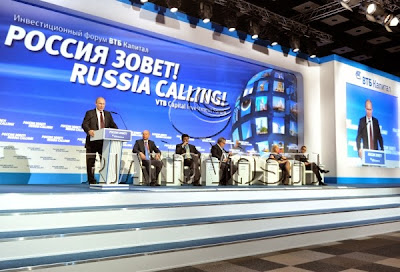 The Putin smirk. (call it his Mona Lisa smile). The Russian president said the economy was "inefficient" during VTB Capital's Russia Calling!
The Russian economy is operating well below its potential and a 3.1% labor productivity rate is intolerably low for the country poised to become Europe’s biggest, President Vladimir Putin told the 5th Russia Calling! investment forum in Moscow.
“The key bottleneck for the Russian economy is its low efficiency. In terms of GDP, Russia is poised to become Europe's number one economy and the fifth biggest in the world, adding that Russia is on a par with other countries in the EU in terms of per capita GDP and consumption.
However, labor productivity is now less than half the level of most developed economies – at 3.1 percent. In coming years, productivity must increase by 5%-6% a year, twice the current rate. "Only in this way can we overcome the efficiency gap," the president said. "I am confident that we are capable of doing that," he concluded.
The current abyss between consumption and productivity is dangerous, Putin said. “Living off rent from natural resources, at the expense of future generations, unearned wealth cannot be stable or long term," he added.
Oil and gas revenues now provide for more than a half of Russia’s budget, with various institutions repeatedly warning that such a oily black hole could soon swallow the country’s economy.
Comfort in store for investors in Russia
Hopes for a rapid recovery of the world economy were not justified; the recovery of the global financial system will be prolonged. And only concerted actions of states and new sources of development can speed it up. This came as a statement by Vladimir Putin during his speech at the "Russia Calling!" investment forum, which was held in Moscow on October 1-3.
The world economy has already lived through its worst days, but it is clear that a quick recovery is not to be expected. The structural crisis of the global financial system had its effect, Vladimir Putin noted.
"The acute phase of the crisis is overcome; the current risks are more or less taken under control. However, hopes for a quick recovery of the global economy, if there were any, are not justified. The crisis of the existing economic model is structural, which means it has a long-term character."
Concerted steps and new sources of development are needed. According to the President, this very approach was laid in the basis of the Russian G20 chairmanship, and then enshrined in the final St. Petersburg plan of action. Vladimir Putin stressed that the G20 countries had found mutually acceptable solutions of many issues.
"A specific program of the G20 work aimed at improving the investment climate and encouraging long-term financial investments was developed and is already being implemented. The key issue at the summit was the problem of a tax policies reform aimed at dealing with tax evasions, including the use of off-shore zones. We have adopted a fundamental decision on this issue. A joint plan of actions for combating the dissolution of the tax base was approved. We have also agreed on standards of information sharing for tax purposes."
Vladimir Putin has also touched upon foreign trade matters at the “Russia calling!” forum. Its volumes are decreasing, but working together, the G20 will be able to resist it.
“The Group of Twenty has reaffirmed its support of the trading system. We have agreed to extend the commitments of our countries to limit protectionism in the global trade until the end of 2016. I must tell you, it was a difficult task to persuade all the participants of this meeting to agree to this decision.”
However, some countries continue to use protectionist measures and put a spoke in the wheels of Russian producers. Russia could not but react to violations of the regulations of the international trade, the Russian leader said.
“As examples of protectionist measures I’d like to cite “energy adjustments” used by the European Commission while conducting anti-dumping investigations into Russian exports, as well as the notorious “Third Energy Package”, quotas on supplies of agricultural products and tariff policy in respect of rail transportations through the territory of some EU countries. We will learn to defend the rights of the national business, and actively use the WTO mechanisms as the old-timers of this organization do”.
Vladimir Putin gave a commission that the government together with the business community should start the procedure of protecting the interests of Russian producers on foreign markets in the framework of the WTO.
The President has specially dwelled on the topic of attracting investors to Russia. The volume of direct foreign investments in the Russian economy is growing: during the first half-year it reached $ 55 billion. This is three times more, than during the similar period of 2012.
In order for these investments to increase further, Russia intends to develop private-public partnership.
“The state will share the risks of private investors, putting up money on a repayable and reimbursable basis. I’d like to emphasize that both the first and the second are money from the National Wealth Fund. Mechanisms of concessions, co-financing, and other forms of private-public partnership will be widely developed. These changes in the legislation are being worked out currently.”
Private-public partnership will be applied during the implementation of major infrastructure projects: modernization of the Trans-Siberian Railway and BAM, construction of the Central Ring Road and high-speed Moscow - Kazan railway. It is in these projects that the money from the National Welfare Fund will be invested. Vladimir Putin has cited Abu Dhabi, which intends to invest up to $ 5 billion in the construction of Russia's infrastructure, as “the first robin” of private-public partnership with foreigners. One of Russia's advantages in attracting foreign investments is reduction of inflation, which, according to the President, has all the chances to be below five percent next year.