Things do not seem very joyful on many fronts: crisis of the European Union, budgetary and monetary madness in the United States and problems of debt which threaten Japan - to name only three. For many investors who concentrate only on these markets, the morning waking must be difficult. But the world changes. The dominance of Western markets (including Japan) is no more what it was. They are losing  of their importance as the time passes and as the rest of the world catches them. 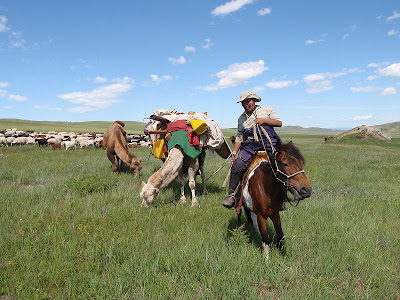 We would say that most of the more remarkable markets we have identified were not in that category.

In South America we would prefer Columbia, looking how developed and safe that had become. As someone who had grown up in the ’80s, back then Medellin was Pablo Escobar’s hometown, and now you can go there and it’s a perfectly safe place, and again fairly developed. As we favor Chile and Peru over Brazil that is much less appealing. Brazil is a market that I think a lot of investors generally have a favorable opinion of as a place that will bloom and continue to bloom, but a lot of investors don’t appreciate how difficult it is to do business in Brazil.

You can look at the “ease of doing business” rankings compiled by the World Bank every year, and Brazil scores very low. It’s easier to do business in Rwanda or Pakistan according to those rankings. That’s not to say that, over the long haul, there won’t be interesting ideas from there, but that was one market that surprised me because it wasn’t what I expected it to be, in a bad way.

We are positive on Cambodia  over India, and prefer Mongolia over China. Exploring these different markets, you find some markets that are not so much in the limelight that are appealing. Another market that I really like now is Mongolia, which is a market that certainly is on no one’s radar, but is really coming on fast and growing 50% this year.

Below is the story of our HK partner's trip to Mongolia :
by Isaac Schwartz

Ah, I love the smell of a bull market in the morning. It’s that mix of diesel, dust and dreams that gets you going!

I’ve spent nine days in Ulaanbaatar, Mongolia. I’ve met with three of the four largest banks here, the largest beverage company, the largest cement company, the largest broker, three different real estate companies, a really hairy coal company, several investors and even a former member of parliament. I’ve got a stack of meeting notes and reports. My challenge is to digest this pile and make some sense of it all.

I haven’t spent all of my time in UB. Last Sunday, Harris Kupperman (CEO of Mongolia Growth Group), a couple of other investors and I went out to the countryside. About 40 miles from UB is a national park called Terelj. It sits at the southwestern end of the Henti Mountain range, which run northwest into Russia. These are old, weathered mountains and the homeland of Chinggis Khaan.

My focus has been on the city of UB because that’s where all the money pools. But the Mongolian countryside is really beautiful and worth seeing. I have lots of pictures, but none seem to really do it justice. There are stunning rock formations, expansive grasslands, picturesque streams, gentle hills and forests of larch and pine — all under a big blue sky full of white fluffy clouds. We also ran into grazing herds of yak and horses.

Of course, the source of all the new wealth in Mongolia comes not from what’s in UB but what lies under the ground in Mongolia’s open spaces. Mining is the big engine driving the economy today. But the country also has a rich supply of livestock. There are some 32 million livestock animals in Mongolia; about half of them are goats for making cashmere wool.

Mongolia is the world’s second-largest producer of cashmere wool, after China, making up about 28% of the world’s supply. It’s an important business for the million or so people (about 36% of the population) that still live the nomadic life. Cashmere sales brought in $180 million last year.

Mongolia’s livestock is also an important producer of dairy products and meat. Because the growing season is so short — only about 100 days — animal husbandry produces 80% of Mongolia’s agricultural output.

While mining gets all of the attention, there are opportunities in agriculture. Mongolians drink a lot of milk, for instance, but most of it is imported and comes from a powder, incredibly enough. So an opportunity exists to produce fresh milk, and there are companies here investing in milk production.

Anyway, we stopped off to meet with a family that still lives the nomadic lifestyle. Here is a picture of their ger, note the satellite dish and solar panels. 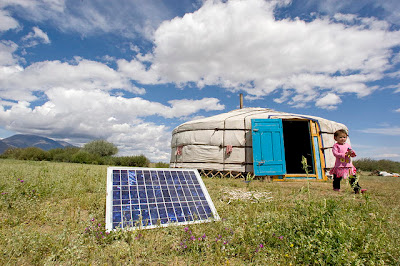 The ger was surprisingly open and airy inside. We sat on a bed, and the lady of the ger prepared us a lunch starting with fried bread and milk tea. Then she cooked a mixture of noodles, potatoes and bits of beef in a pot over a wood fire. It was starchy, greasy and very filling. It was also, frankly, a bit bland. I was looking for some hot sauce.

So Mongolian food is not my thing, but I enjoyed spending the day in the countryside. If I had more time, I would’ve liked to check out one of the secondary cities, like Dalanzadgad in the south near the Gobi and the prime staging city for the great Oyu Tolgoi mine, or wander north into the Hovsgol region, said to be the most beautiful in Mongolia.

I enjoyed the company of my fellow investors as well, as we tried to sort out the opportunities not only in Mongolia, but the world. For what it’s worth, Myanmar was another market that kept coming up in conversation as the next frontier. I think Myanmar will be the big story of Southeast Asia for the next decade.

Harris is a like-minded global traveler and an investor with a keen nose for opportunity. He’s recently been to Kazakhstan, which is often seen as a kind of road map for what could happen in Mongolia in terms of enjoying a similar jump in wealth. He’s also explored parts of eastern and southern Africa. One of his favorites is Namibia. It is, like Mongolia, a country with a small population about to experience a rapid and massive influx of cash (in this case, from offshore oil).

It felt a little surreal to be sitting in Mongolia talking about Namibia, but these kinds of odd connections happen frequently when I travel in the far-flung corners of the world, and Mongolia was no exception. Yesterday, I met with a Mexican who studied for an MBA in Japan and is now running businesses in UB and in Myanmar.

There is opportunity everywhere really, if only you look.