"The richest one percent of this country owns half our country's wealth, five trillion dollars. One third of that comes from hard work, two thirds comes from inheritance, interest on interest accumulating to widows and idiot sons and what I do, stock and real estate speculation. It's bullshit. You got ninety percent of the American public out there with little or no net worth. I create nothing. I own. We make the rules, pal. The news, war, peace, famine, upheaval, the price per paper clip. We pick that rabbit out of the hat while everybody sits out there wondering how the hell we did it. Now you're not naive enough to think we're living in a democracy, are you buddy? It's the free market. And you're a part of it. You've got that killer instinct. Stick around pal, I've still got a lot to teach you."

Face à la non diffusion libre du  reportage de J. Fritel nous faisons cette mise au point :
“Mark Carney, the governor of Canada’s central bank, has been informally approached as a potential candidate to replace Sir Mervyn King as head of the Bank of England in June next year,” reports the Financial Times.
“One of the world’s most respected central bankers, Mr Carney, 47, now heads the Financial
Stability Board, which oversees global financial regulation. He was approached recently by a member of the BoE’s court, the largely non-executive body that oversees its activities, according to three people involved in the process.”
Carney is also a 13-year Goldman Sachs veteran and was involved in the 1998 Russian financial crisis which was exacerbated by Goldman advising Russia while simultaneously betting against the country’s ability to pay its debt.
Although the appointment would see the highly unusual precedent of a foreigner heading up the 318-year-old central bank, according to one observer, “As a Canadian national he is a subject of the Queen…That is important.”
Carney’s possible ascension to become the next BoE head, although denied by the Bank of Canada, would be the cherry on the cake for Goldman Sachs’ financial overthrow of Europe in their bid to exploit the financial crisis to centralize power into an EU superstate.
Last year, former EU Commissioner Mario Monti was picked to replace Silvio Berlusconi, the democratically elected Prime Minister of Italy. Monti is an international advisor for Goldman Sachs, the European Chairman of David Rockefeller’s Trilateral Commission and also a leading member of the Bilderberg Group.
“This is the band of criminals who brought us this financial disaster. It is like asking arsonists to put out the fire,” commented Alessandro Sallusti, editor of Il Giornale.
Similarly, when Greek Prime Minister George Papandreou dared to suggest the people of Greece be allowed to have their say in a referendum, within days he was dispatched and replaced with Lucas Papademos, former vice-President of the ECB, visiting Harvard Professor and ex-senior economist at the Boston Federal Reserve.
Papademos ran Greece’s central bank while it oversaw derivatives deals with Goldman Sachs that enabled Greece to hide the true size of its massive debt, leading to Europe’s debt crisis.
Papademos and Monti were installed as unelected leaders for the precise reason that they “aren’t directly accountable to the public,”noted Time Magazine’s Stephen Faris, once again illustrating the fundamentally dictatorial and undemocratic foundation of the entire European Union.
Shortly afterwards,Mario Draghi – former Vice Chairman of Goldman Sachs International – was installed as President of the European Central Bank.
The U.S. Treasury Secretary at the beginning of the 2008 financial collapse was Hank Paulson, former CEO of Goldman Sachs. When Paulson was replaced with Tim Geither, Goldman Sachs lobbyist Mark Patterson was hired as his chief advisor. Current Goldman Sachs CEO Lloyd Blankfein has visited the White House 10 times. Goldman Sachs spent the most money helping Barack Obama get elected in 2008.
As the graphic below illustrates, the economies of France, Ireland, Germany and Belgium are also all now controlled by individuals with a direct relationship with Goldman Sachs.
Dominion over virtually all of Europe’s major economies, as well as the United States, by one international banking giant, notorious for its role in corruption and insider trading, is now almost complete.
Goldman Sachs rules the world. 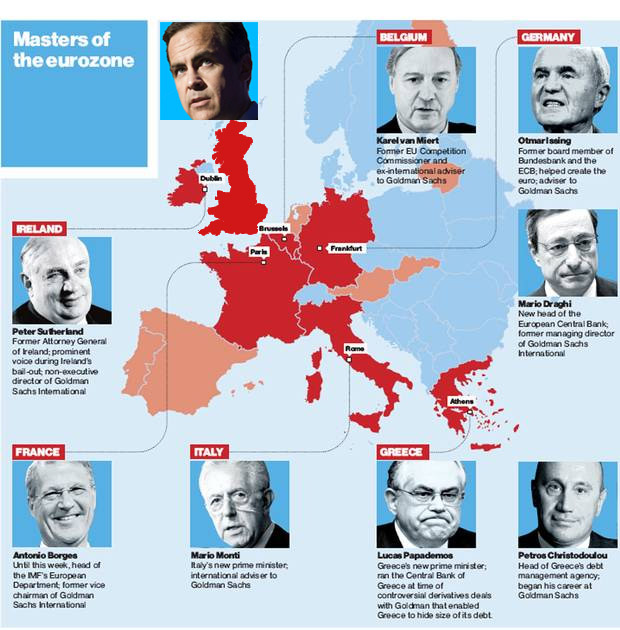