Merkel and The Juggling Group

German newspapers sets out 5 major problems for Mrs Merkel, now that she has returned from holiday.

a) Increasing reluctance to provide further aid to Greece from members of the FDP (her coalition partner) and the CDU's Bavarian sister party (the CSU). In addition, there is the matter of the decision by the German Constitutional Court as to whether the German President can sign off on the fiscal compact and the ESM – generally, the German press is raising the issue of conditionality;

b) Issues in respect of renewable energy, childcare and gay rights;

c) The weakening support for her coalition partner the FPD – now has just 4.0% of the vote in recent polls. You need at least 5.0% to gain any representation;

d) Mrs Merkel's sister party the CSU is getting more populist, given impending State elections next year. They are opposed to a further Greek bail out;

e) Recently, Mrs Merkel had to rely on support from the opposition SPD and the Greens to get her EZ/Euro rescue efforts passed in Parliament, due to defections from her own coalition. However, Peer Steinbruck, a leading member of the SPD and former Finance Minister, states that Mrs Merkel cannot count on their continued support, without offering "concessions"; 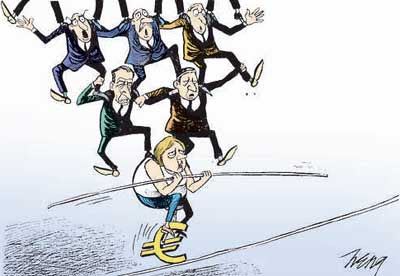 Dutch retail sales decline materially. June retail sales rose by +1.0% Y/Y, as opposed to expectations of +2.5% and +1.6% in May. The markets have ignored Holland – dangerous. The Dutch are becoming more Euro sceptic, given their economic problems and general elections are due in mid September. They are also one of the remaining 4 countries in the EZ, which has a AAA rating, the others being Germany, Finland and Luxembourg. However, Moody's have stated that Germany, Holland and Luxembourg risk losing their AAA status. The Dutch have been particularly hawkish on Greece.

Over the weekend, I read numerous articles which (for, effectively, the first time) keep bringing up the subject of a referendum (in respect of the EZ/Euro) in Germany. Yes, the SPD has proposed a referendum and Schaeuble, a month or so ago, talked about it. However, the increase in calls for a referendum has surprised me. In addition, there is increased speculation (including on Bloomberg today) that whilst the the Constitutional Court will allow the German President to sign off on the fiscal compact/ESM, they may impose conditions which (severely?) impact the ability of Mrs Merkel/Germany to act. As you know, I believe that the Constitutional Court will allow the President to sign off on the fiscal compact/ESM, but remain concerned about (restrictive?) conditions. Any such conditionality will clearly be a major negative. In addition, the ECB have stated that they will only act if the relevant countries first seek support from the EFSF/ESM. Any material limitations wh ich, for example, do not allow the ESM to be leveraged, due to conditions imposed by the Constitutional Court (it's far too small at present), will be a major problem.

As you know, one of my biggest concern remains that Mrs Merkel has not sold the idea of the EZ/Euro to the German's, preferring to do deals in dark, smoke filled rooms with the doors firmly bolted. I continue to believe that this is a very dangerous and high risk strategy. In addition, a number of German politicians report that Mrs Merkel says one thing in public, but does the opposite in private. That game has ended – the spotlight is on her and on her actions. There is no question that Mrs Merkel and most German politicians are keen to support the EZ/Euro. However, with increasing opposition from her own party and coalition partners and the SPD's statement that they want (presumably political) "concessions" for on going support, (which Mrs Merkel will clearly need), the Risk/Reward situation is changing.

Recent polls suggest that the Germans understand that the costs to their economy will be far greater if the EZ/Euro breaks up, but it looks as if the support is slipping. Populist politicians are playing to the crowds, which will aggravate the situation.

The impending Dutch elections remains a serious threat and is being ignored – dangerous.


EZ: The Drama Ahead in September

By Megan Greene, Roubini Global Economics (www.roubini.com)
As usual, this has been a lazy August, but we do not expect the quiet to last. Indeed, for the second September in a row, developments in the eurozone (EZ) have the potential to be highly dramatic. 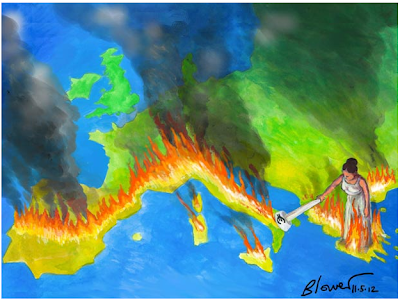 Summer in Europe : The ring of fire
Greece: The troika is due to return to Athens in September and make a ruling on whether to release additional tranches of funding to Greece. If the troika decides to cut the taps off—and we don't think it will—then Greece would default and exit the EZ. The Greek government aims to renegotiate the second bailout program when the troika returns to town in September. If the troika plays hardball and does not grant the Greek government any concessions, then the governing coalition would likely collapse. Also in September, the Greek parliament will have to pass a number of measures to generate €11.5 billion in savings for 2013-14. With a high degree of austerity fatigue in Greece, we can expect social unrest.
Portugal: With Portugal starting to slip on its fiscal targets, we expect Portugal to begin negotiations on a second bailout package. Currently, Portugal is meant to return to the markets in 2013 but, with bond yields well above sustainable levels, we regard this as highly unlikely.
Spain: The auditors Deloitte, KPMG, PwC and Ernst & Young are due to present their full reports on the capital needs of Spain's financial sector in September. The findings of this report will be used to determine the exact amount the Spanish banking sector will need to borrow from the EZ's bailout fund, the European Financial Stability Facility (EFSF).
Italy: The Italian general election campaign will begin in earnest in September. Although polls point toward a center-left-led coalition, Italian politics is at its most fluid state since the early 1990s and, with so many voters still undecided, it is impossible to call the election.
Germany: The German constitutional court is due to vote on the legality of the ESM (the successor to the EFSF) and the fiscal compact on September 12. We expect the court will deem the ESM legal but, if this does not occur, it would serve a major blow to EZ policy makers, who have committed the ESM to potentially purchasing sovereign debt in the primary markets.
France: The French government is scheduled to unveil its 2013 budget in September. Markets will be disappointed if it does not include large spending cuts, but the announcement of further austerity risks riling trade unions and stoking civil unrest.
Netherlands: A general election is scheduled for September 12. Recent opinion polls suggest the ruling right-of-center VVD will be unable to form a right-of-center majority government. Consequently, coalition negotiations are likely to be protracted. The left-wing, euro-skeptic SP may win enough votes to be the second-biggest party. This would make it more difficult for the new Dutch coalition to secure parliamentary support for additional support measures for peripheral EZ countries.
Eurozone: There is a progress report on establishing the ECB as a single banking supervisor due out in September. Given that many details have not been hammered out yet, there is a chance that the progress made on this first step toward a banking union will disappoint.
In terms of the broader EZ developments, we expect the Greek government to collapse by the end of the year, and a Greek exit in early 2013, followed by an exit by Portugal by end-2014. Moreover, we expect Spain to receive official support from the EFSF/ESM in late 2012 after the ESM has been fully ratified (the second half of September at the earliest), while Italy will hang on longer but will eventually need support as well.