A Flowchart So Simple Even An Economist Can Get It

Since it is now quite clear that despite calling for even endless-er QE, the uberdovish Chicago Fed, and by implication the entire FOMC, is still clueless about the two most critical processes of modern fiat-based economics, namely bubble formation, and its counterpart, bubble bursting, we decided to give them a helping hand, and to explain just how these two fundamental events occur, with flow charts so simple, even an Economics PhD can get it.
Bubble Formation: start at the bottom left... 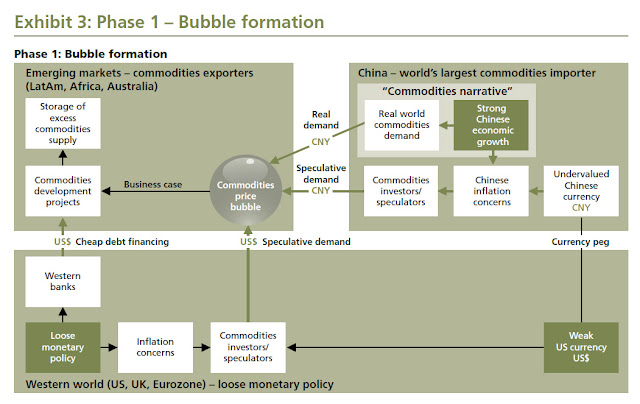 Bubble Bursting: ...and end with a 'debt crisis' and a 'rush for the exits' 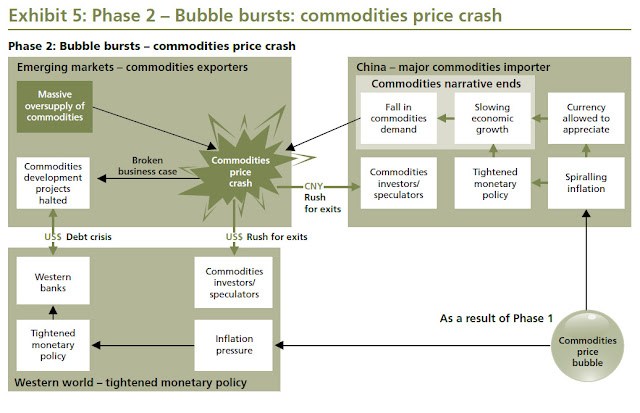 Rinse and Repeat - Simple.
Not convinced yet ?... Look at the following


"We still do not have a good definition of an asset bubble; and we still do not know how to identify them, what causes them to grow or burst, or what their welfare implications are. More research needs to be conducted to address these questions".
And this coming from the same Fed, whose president concurrently said more QE is needed, i.e., even bigger bubbles need to be blow.


Is there, thus, any wonder why nobody has any faith left in the US economy, and why everyone is convinced that the next epic market collapse, when the next bubble bursts, may very well be the final (hopefully this should go some way to explaining the age old question: why are there $2 trillion in cash on the sidelines and why do corporations have zero faith in the economy, and the market, and are unwilling to invest any cash in either capex or hiring).

Essentially, Evans, and the Chicago Fed, are explicitly stating that the Fed's actions instead of making the situation far more dire, are improving it.

But where it gets scary is that just today, the same Fed, which is so sure about the affirmative impact of its actions, asks "what are asset price bubbles" (answer: always and without fail the direct effect of ultra loose monetary policy combined with unleashed animal spirits, but what do we know: we have no Econ PhD), confirming it has no clue what the adverse consequences of monetary policy are. And this is the Fed - one which does not grasp the very simple nature of asset bubbles in a fiat world - that is saying Bernanke should print until he literally runs out of toner cartridge. Why whatever can possibly go wrong?
It gets better.
The paper acknowledges that "For at least the past 25 years, the Federal Reserve has tended to follow an approach to asset bubble management in which there is little or no restrictive monetary policy action during the bubble’s formation and growth, but there is a prompt easing in the form of quick reductions in market interest rates once the bubble bursts." In other words the Fed is perfectly happy to have its policies result in something known as an asset bubble, which the same Fed admits it can't quantify, but not intervene until the entire economy is on the verge of collapse and then to literally throw the kitchen sink at the problem, an epic misconception which is at the basis of Bernanke's statement that he can cure inflation "in 15 minutes." We also learn something rather amusing about this Fed policy, subsequently known, appropriately enough as the Jackson Hole Consensus: "The intellectual foundation for this approach was the seminal piece by Ben Bernanke and Mark Gertler (originally published in 1999)." In other words, years before his infamous 'helicopter" paper, Bernanke was already espousing the free blowing of bubbles, consequences be damned.
Here is where it gets fun: the paper next admits: "The Jackson Hole Consensus appeared to work well until September 2008, when the financial system came close to a complete meltdown." Without say so directly, the Chicago Fed, which recall does not know what asset price bubbles are, implicitly admitted that it was the Chairman's own ideology which led to the epic crash that nearly wiped out the financial markets of the "developed" world, and has since pushed the world into the greater depression ever seen, one only offset so far courtesy of the ever greater risk, expected to hit $5 trillion by the end of 2014, that the Fed has onboarded on its own balance sheet. In essence the Fed has become the biohazard repository of only resort. It is this biohazard that is somehow expected to find willing buyers when the time to crash the market, i.e., tighten comes.
There are many more pearl of wisdom in the paper, some of which are the following:
Publié par claude@investlogic à 04:14