Below are some of our thoughts and comments after some discussions and meetings with international investors and domestic players of developing Russia. Here are general topics but we believe to invest into one country and participate to its growth you have to understand its culture and soul as to be able to grow with the country

Will Russia’s trade balance shift towards the Asia-Pacific region? Does Putin’s speech at the latest APEC summit mean Russia is determined to change gears? How significant of a turn could it be? And who would benefit the most? Peter Lavelle is joined by Ben Aris, Simon Fentham-Fletcher and Eric Kraus to discuss what Russia should do about its small share of trade in APEC.

Some times ago, I argued that I supported that Western Europe would have interest in going out of the Atlanticist lap to construct an economic and political alliance with the Eastern-euro block in creation around customs alliance Russia / Belorussia / Kazakhstan. It seems to me that for an European Union deeply indebted, out of fuel to enlage, and very dependent on energy, this direction could bring new markets in export, energy security, important potential of economic growth and also new political vision.


Some time ago one of my readers, David, sent me the following comment: "I find it difficult to grab what your Eurasian union could make to the UE (…) Do you see Europe going to Kazakhstan"?

The first answer which I feel like making is the following:

Europe isn't only the EU, from which the last wave of widening dates of 2004, and knowing that no other wave of enlarging seriously envisaged today. The European continent counts 51 states, and the EU includes only 27 members. The EU is, in my opinion, in no way a goal, but a stage in the building of bigger continental Europe, going from Lisbon to Vladivostok, by nature an Eurasian Europe as displayed geographically in Europe and in Asia. 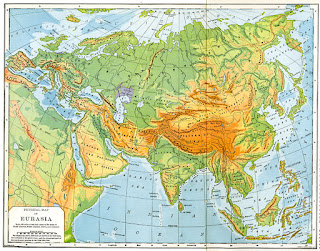 Debates on the borders of the EU enlargement brought to contradictions:

Today, neither the EU 27 in a quasi bankruptcy, nor Russia alone have the force and means to be able to face up giants that are America on decline, or the two big emerging powers, India and especially China, almost assured to become the first worldwide power in the middle of this century. Russia as well as Western European states are therefore today and each on their own condemned in a politics of  alliances to reinforce their regional positions, and their total influence.

After the collapse of Soviet Union, the extension to the East of the European Union seemed unavoidable. This extension, accompanied with a widening of NATO, was made in a spirit of confrontation with the post Soviet world. But the revival of Russia these last years and the financial shock of 2008 heavily changed situation. The terrible financial crisis which knows the European Union is undoubtedly the most absolute brake for the EU expansion, leaving some European states on the threshold of the door, Ukraine at the head.

As mentioned Andrei Fediachine some time ago: "In this period of crisis, not enough European powers want to think of a possible membership to the EU of another poor country of oriental periphery -Ukraine-. What's more of the extension to a country of about 46 million inhabitants which continuously knows a political and economic crisis".

In the case of Russia, separate member of the European family, he would be very naive to think that his reconstruction isn't made via a maximum strengthening of relations with states of his close neighbors, that is to say in the post Soviet states, and in an Eurasian logic. And that is exactly what is taking shape today as part of an access to natural resources.

While Western Europe plays currently a bridgehead for the US, which threaten a real Damoclès sword with the anti-missile shield, time has come to look at a collaboration between Europe and the former Soviet states and to be interested in what takes place in the East, around this new customs union lead by Russia.

As  the 11 states of the CIS (Armenia, Azerbaïdjan, Byelorussia, Kazakhstan, Kirghizstan, Moldova, Uzbekistan, Russia, Tajikistan, Turkmenistan and therefore Ukraine) signed an agreement on the creation of a zone of free trade, Ukraine is thinking to apply for  membership in the Customs Union Russia-Belarussia-Kazakhstan, not considering contradictory potential membership to two  different zones of free trade.

More to the East, it is from Moscow that came the strongest wave shock since  Vladimir Putin's announcement of a credible constitution of an Eurasian Union to the horizon 2015. Besides the cooperation as part of the Eurasian economic Community (CEEA) is an absolute priority for Russia. This plan of Eurasian Union leans on the Trade Union in force with Belorussia and Kazakhstan, and might adhere all Member states of the euro-Asiatic economic Community. Kirghizstan (trade union) and Armenia (union Eurasian) already asserted their support of these plans of Eurasian integration.

This global evolution is the ineluctable shift towards the multipolar world which won't be any more under Western domination. For Europeans from the west, it is time to look eastward at their continent. The new Eurasian pole, which gets organised around Russia, is probably the most promising.