Below are some of our thoughts and comments after some discussions and meetings with international investors and domestic players of developing Russia. Here are general topics but we believe to invest into one country and participate to its growth you have to understand its culture and soul as to be able to grow with the country

After a lovely week end in Nizhny Novgorod we attended the yearly forum “Russia Calling” We enjoyed the traditional Moscow Indian Summer – that all-too-brief span of lovely weather in a city where climate constitutes an almost existential challenge. 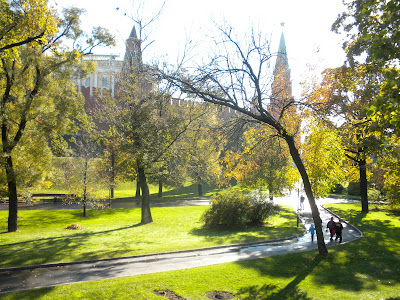 So we inevitably discuss the most recent “feline scandal” - aka Pussy Riots – not for what it tells us about Russia, but for what it tells us about the West. We have put out the kitty litter, and are ready to move on to more weighty topics – the growing chaos in the Middle East will provide much grist for our mill in coming weeks. For now, we have focused on Russia, governance and economics – where we find the purportedly half-empty glass to be actually half-full.

The irony of course is that the ultimate result of this gross manipulation has been a truly spectacular own-goal for the West. The rift between Russia and the Atlantic Alliance is widening, leaving Russia faced with a choice between isolation or strategic alliance with China; President Putin has clearly opted for the latter.

China, of course, happens to be the sole global power currently in a position to imperil the fundamental strategic interests of the West. Russia’s historic mistrust of the Yellow Peril, as well as her reticence to see China as an equal and an ally, has been gradually eroded by a decade of gratuitous provocation by Washington, London and Brussels, leaving Russia to find allies where she can. From the Chinese standpoint, this is a gift from heaven, helping to shield their one potential Achilles heal – dependency upon imports for a range of resources: energy, grain, ores, and even fresh water.

Political alignments ultimately follow from economic interests; how anyone could have thought that this eminently foreseeable outcome would advance the strategic interests of Europe or the US we must leave to the reader’s imagination – the logic behind a decade of bear-bating totally escapes us.

The irony, of course, is that Russia has been a fundamentally conservative (at times, outright reactionary) power since the early 19th Century. Although We tend to shy away from geographical determinism, we recognize that, devoid of natural boundaries or durable allies, invaded and totally devastated by European armies three times in little more than a century, first Tsarist Russia, then the Soviet Union sought to maintain strategic buffers against the perceived threat of aggression from the West. Indeed, Post-Soviet Russia is the ultimate status-quo state – seeking not to overthrow the existing order, but, rather, to enhance her own stake in it.

Whether or not Russia’s political system pleases the West is irrelevant – she is neither part of the European Union, nor does she aspire to become the 51st American state. Like every other country, Russia has her strategic interests and goals, and will act to further them as best she can; she is neither a defeated nor a penitent power.

Future historians will long ponder the spectacular own-goal scored by Washington-London-Brussels, and the appalling failure of strategic thinking as regards Moscow. Let it displease some of our readers, but the end of the USSR is the story of repeated betrayals of Russia by the West. As pointed out by Professor Stephen Cohen in his seminal Soviet Fates and Lost Alternatives Gorbachev missed one of the fundamentals of diplomacy – get it in writing!

There was nothing inevitable about the collapse of the USSR – which was neither defeated in war, nor overthrown by internal uprising; it presents the unique case of an empire voting itself out of existence. Russia expected to be rewarded by her erstwhile adversaries for abandoning the Soviet empire and rejoining the West of her own free will; she was, instead, treated like a new wild territory just worth to be conquered and plundered .

With the collapse of the apologetic, compliant Yeltsin government, the West was confronted with a more nationalistic and purposeful regime – while Vladimir Putin was fundamentally neither pro- nor anti-Atlantic, he was naturally wary of the Western powers, and devoted to the furtherance of what he sees as basic Russian interests; while this may prove inconvenient for the West, it was to be expected, and at least some attempt at understanding Russian interests and motives would have led to far better mutual outcomes.

That said, what is striking is that, for a country about which we have been warned of doom, destruction and despair for the past 15 years, Russia is doing really quite well, seen from 37,000 feet, the Russian economy is a lone spot of dull green amidst the blood-red and dark gray of Western Europe, coming within spitting distance of the “three fives” – 5% unemployment, 5% inflation and 5% growth, to which we would add, almost zero net debt (in fairness, the GDP projections have recently been downgraded to 4%. Russia remains  a bit too close to Europe, where import demand is not exactly booming). Social welfare has improving steadily, birth rates are up dramatically, mortality is on a declining path as social stability improves, and the society is clearly undergoing a process of normalisation.

The financial press has been carrying on a campaign of disparagement for the past decade, and the reader will note that most articles purporting to show the parlous state of the Russian economy will cite the weakness of the RTS index – true, but irrelevant.While EM GDP continues to grow far faster than the DM GDP, their margins and ROE have converged almost entirely. There has thus been no fundamental reason for EM equities to outperform.

In fact, we continue to believe that equity index performance tells one a great deal about the dynamics of... the equity market – but precious little about anything else! Readers doubting this somewhat provocative assertion need only look at the Chinese indices; for most of the beginning of the last decade, while Chinese growth was a multiple of the growth anywhere else, its equity index was flat as a pancake. That all changed in the second half of the decade, when the index went ballistic, topped out, and then crashed back to almost where it had started. In the meantime, China became either the world’s second largest, or its largest economy. Too bad it was so difficult for financial investors to catch a ride.

Russia is no longer either the best or the worst of its class. It has become a middle-growth, middle-European, middle-income economy, primarily driven by domestic consumer growth, and with an early-stage credit cycle and much unsatisfied consumer demand; it has overtaken Portugal. That said, the Russian economy is relatively open, and growth prospects are limited by the recessionary global outlook – Russia will likely outperform her peer group, but is very unlikely to soar alone. 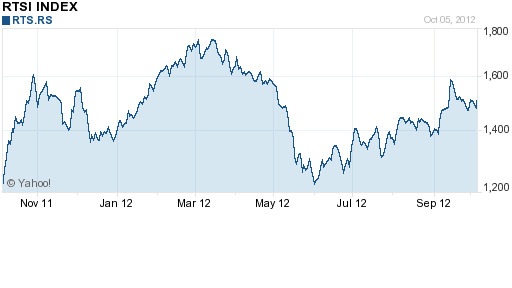 How to trade it ?  see our former article : why-russia-could-be-gusher-for-daring

As regards the macroeconomics, we are very sanguine. Macroeconomic management has been excellent. Russia has extremely low debt, declining inflation, and improving social welfare; the politics are quiet, the banking system a net foreign creditor, with confidence in the banks supported by their performance during the Global Crisis. Both the Central Bank and Finance Ministry proved highly competent during periods of financial stress.

-We think the fashionable obsession with “diversification” and high-tech totally can be profitable on the long run although that Russia will not become a major producer of mobile phones or fast-moving consumer goods in our lifetimes – it is simply not in the business culture. While there are several poles of technological excellence ripe of development – software, aeronautics, weaponry, etc. other obvious areas for economic growth are agriculture, services, domestic infrastructure and transformation of natural resources. Agriculture should someday outweigh oil.

-The impact of corruption is real but grossly overstated. The corruption surveys measure not corruption but the perception of corruption, and Russians compete to tell wild tales of official misdeeds. If the surveys were remotely credible, then Russia would simply not have the foreign reserves it does. That said, not just administrative corruption but especially, inefficiency and old-fashioned pig-headedness are a major impediment to the development of the sort of network of small and medium enterprises that have been so important in Northern Italy and Germany.

-Russia, the top agricultural importer for most of the 20th century, is now a world-class grain exporter, and, more impressive still, is set to become a net exporter of poultry; a huge animal husbandry project is now underway aimed at reaching self-sufficiency in beef. Given the deep Chinese market at Russia’s doorstep, this is an obvious pole for development.

-Turning to the financial markets, while we have seen vast improvements in the management of the banking system, of public and private debt, and of the currency, we remain deeply frustrated by the equity market. There are virtually no truly public companies; most firms are controlled by a majority shareholder or group of shareholders, whose interests are frequently not aligned with those of the minorities, about whom they care very little.

-The main weakness of the banking system is the lack of both domestic liquidity and of capital for further growth – regulatory capital requirements are fairly draconian and we see no risk of a banking crisis, however the sector is almost totally dependent upon the Central Bank for the provision of liquidity.

-Any number of recent stories in the oil, mining, banking and telecommunications sectors have left equity investors feeling randomly exposed to machinations by majority owners about which they are generally the last to know. Furthermore, until recently, dividend flows have been niggardly and share buybacks almost unheard of – that, at least, is now changing, as more companies begin to announce transparent dividend policies and to increase their pay-outs.

-The fundamental weakness of Russian financial markets is the absence of deep pools of long-term domestic liquidity. The pensions reforms have been botched, repeatedly, and we see little or no effort at creation of the sort of domestic, long-term investment capital that could begin to render the Russian market independent of global risk-capital flows. Yes, the fusion of the Micex and the RTS, along with the establishment of a single depository are important and long-overdue steps, but without domestic financial institutions, the market will remain something of a casino.

As a destination for direct foreign investment, Russia is unmatched. The great majority of foreign companies doing business in Russia are performing extremely well, and most are increasing their investments as Russia continues to outperform its neighbourhood. A new automobile plant is being opened each year in Russia, as they close down elsewhere in Europe. The generally happy outcome of foreign investment in Russia forms a sharp contrast with the very unfortunate experiences of numerous foreign investors in China.

Investment is a key priority for Russian economic growth

What does it imply ? As our readers know, we do think that Russia can be the central player in bridging Europe and Asia. -See Part 2-
Publié par claude@investlogic à 09:24