These giants boast the world's largest economies and active militaries, their decisions influencing politics at a global level. Despite a massive trade agreement and many diplomatic meetings, the two nations struggle to maintain the semblance of a civil relationship. As pressure mounts from U.S. leaders, China remains unfazed, cooly growing its military and economy. See how these two titans of industry and power measure up when pitted head-to-head.

And the US dollar hedge holds simply in 11 aircraft carriers...

China's net international investment position was positive, at nearly US$1.75 trillion, by the end of June, data recently released by the State Administration of Foreign Exchange (SAFE) shows.

This represents an annual increase of 37 percent on average since 2004's record of a positive US$276.4 billion, SAFE's data shows.

The net international investment position refers to the value of external assets minus debts.
However, economists are concerned about the structural imbalance in the position's makeup.

Foreign exchange reserves, which stood at US$3.3 trillion on June 30, accounted for 67 percent of China's external assets. Most external debts came in the form of foreign direct investment, which was US$1.9 trillion at the end of the first half, equivalent to 60 percent of total debt.

This is a result of a phenomenon described by Nobel prize-winning economist Joseph Stiglitz, one that some economists say captures China's situation.

Some emerging economies, the theory goes, accumulate a large amount of foreign exchange as a result of trade surplus. They invest the forex in low-yielding U.S. Treasury bonds, while borrowing at high costs from developed countries in the form of foreign investments.

One way to break this cycle would be to increase the global use of the yuan. At present, because it is not commonly accepted yet, China is bound to have huge forex storage and forced to invest heavily in the U.S. government debt. 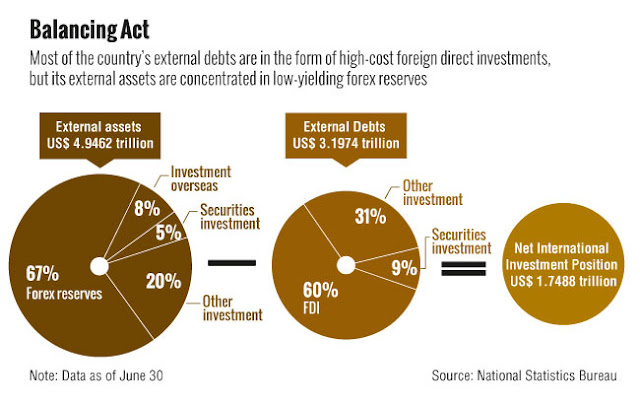 This has "led to a currency mismatch and significant risk exposure to the forex reserve's depreciation," said Zhang Monan, research fellow at the State Information Center, a policy think tank under the nation's top economic planner, the National Development and Reform Commission.

By contrast, he said, Germany does not face similar pressure even though it is also a trade surplus country. This is because it does not need to keep a large forex reserve since the euro is a reserve currency.

Encouraging companies and individuals to hold more forex and invest the money themselves can also help end the cycle Stiglitz described, Zhang said, as is the case with Japan, which holds only 17.6 percent of forex assets in its national reserve.

Since the second half of last year, China's forex reserves have shown a month-on-month decline several times. Some experts believe that this is partly because domestic companies and individuals have started keeping more U.S. dollars in their accounts. There have been signs of stronger capital flows out of China, which many economists and regulators believe is the result of heavier Chinese investments overseas.

Chinese nationals and companies have been the main force driving recent capital outflows, a SAFE official said. In fact, "our analysis has found that the amount of withdrawal of foreign investors' investment principals has fallen compared to one year before."
LINK