Notation of Countries :
Towards a Consideration of the Environmental Risks

While the classic rating agencies continue to focus on the financial debts, some investors want to integrate environmental and social criteria into the notation of Sovereign debt. A way of going out of the ”all financial”?

Launched in 2011 by the partnership of the UN UNEP FI with fifteen international investors and Global Footprint Network (GFN), this initiative proposes a custom-made method to include the environmental risks in the analysis of country risks. The target is a question of filling a weakness of the bond analysis: although the environment infers " emergent systematic risks ", the evaluation stays marginally and no investor or rating agency integrated  these ESG risks at the heart of country analyses. Nevertheless, a degradation of 10 % of the production capacity in biological resources of a country can degrade its trade balance, 1 to 4 % of its GDP. What means, in the financial jargon, that the environmental risks are financially materials for the sovereign credit risk .

In the light of the appeals for a bigger supervision and to more regulations from the rating agencies, these agencies would have the opportunity to show their leadership by taking a more proactive approach. Along the launch of the initiative, the UNEP-FI and its partners had invited Standard and Poor’s, Fitch and Moody’s to participate in the project. Unfortunately Moody’s did not answer, Fitch declined and only Standard and Poor’s demonstrated some interest, but not to the point to join the initiative. While a project of European rating agency is in debate in Brussels, this situation could change soon? Let’s hope that the phase two of E-RISC, in preparation, will bring some breach ! 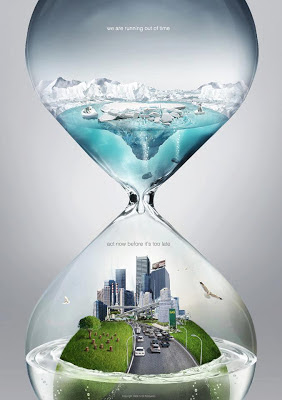 Most investors have long thought that the traditional economic indicators —and more recently, high-level environmental and political factors — were sufficient to comprehensively understand country-level competitiveness and the robustness of their economies. However, we live in an ever-more ecologically and fiscally constrained world. This is not only evident from the on-going debt crisis, but also from climate change, water scarcity, food shortages, deforestation and the many other environmental crises that we face today. Current consumption, demographic and environmental degradation patterns mean that these sorts of issues could influence the resilience of countries to deal with such changing environmental patterns in the medium to long-term. Thus, the risk frameworks that are currently being used to assess the exposure of financial products to creeping local, national and global risks must better reflect the interconnected and systemic nature of the 21st century.

The availability of natural capital for our economies is likely to increasingly become financially relevant. This can be the case not only for individual businesses, but most likely for nations as well. Natural capital can be defined as the stock of ecosystems which provides a renewable flow of goods and services such as fish, crops, timber, climate regulation and many other services. In the last few years, there have been a variety of studies that have improved the understanding of the value of ecosystem-services (such as The Economic of Ecosystems and Biodiversity, TEEB, coordinated by UNEP) as well as ecological degradation and over-use as a considerable cost to society, business and nations. For example, a study by the PRI and UNEP FI , commissioned to Trucost, measured the magnitude of global environmental externalities to be US $ 6.6 trillion in 2008, about 11 percent of the value of the global economy. The question is whether such environmental phenomena affect the financial underpinnings of sovereign fixed income investments or other types of securities. A country’s use and availability of ecosystem services plays a role in the health of its economy and its ability to secure a high quality of life for its citizens. Therefore, both the availability and use of these resources are likely to influence core economic indicators, such as its sovereign credit ratings and a nation’s ability to meet future debt obligations (positively or negatively).

Although considerable progress has been made to assess and compare the financial performance of ‘conventional’ equities with equities that embed environmental, social and governance (ESG) into financial frameworks for equity performance, to date, little progress has been made linking ESG materiality to fixed income investments, especially for sovereign bonds. This may have to do with their more ‘passive’ nature of investing. However, bonds are not shielded from systemic risks related to climate change and weather extremes, water scarcity, ecosystem degradation and availability of natural capital. At present, though, these global environmental externalities and other ESG issues are not systematically analyzed, valued or priced by capital markets).

The focus is on the "credit risk" rather than the "financial performance" of government bonds. We aim to make a direct link between ecological risk (as one in a range of possible material ESG factors) and sovereign credit risk. To this end, we are focusing on the integration of financially material, ecological indicators into credit risk models; this is in contrast to the separate screening tools currently used that are based on qualitative environmental information. A conceptual overview is given in Figure 1. In the practical linkage between natural resource use and availability to the functioning of our economies, the starting point is the comparison between humanity’s demand (Ecological Footprint) and the Earth’s biocapacity. 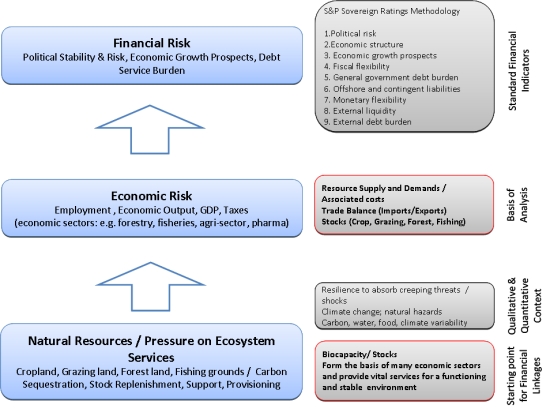 Figure 1: Conceptual overview of how to address the linkages between ecological, economic and financial risk may be addressed

The world is has been in ecological overshoot since the 1970s and in 2008 humanity demanded an additional half a planet’s worth of resources . When the Ecological Footprint associated with a nation is greater than the domestic biocapacity, that nation is said to be in "biocapacity deficit." An increase in biocapacity deficit, coupled with the rising costs of competing for resources from foreign ecosystems also under stress, may undermine a country's economic stability, competitiveness, and resilience to cope with increasingly interconnected financial, economic and environmental shocks. 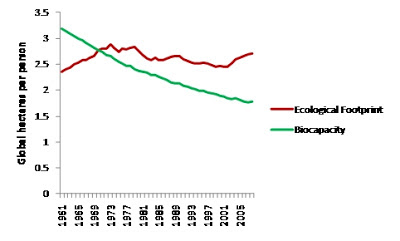 Other relevant criteria not accounted for in credit ratings will also be analyzed and integrated into the methodology. The goal is to foster shared learning from working with banks, investors and credit rating agencies, and to enable the integration of ecological risk in sovereign credit ratings and government bonds.

To note a Country is not to note a company

Actually, the question of the weighting constitutes a choice differentiating between the investors or the managers: as for one asset manager the distribution maybe almost inverse of that of the FIDH, which is of 70/20/10 between the Environment, the Social and Governance (as quoted in the report of progress 2011 of the PRI of the UNO). Other element of differentiation, the normative exclusion: certain investors refuse to loan to States which did not ratify international conventions as the Kyoto protocol, for example.

The risk of degradation of the natural capital

Directly bound to the self-sufficiency of the country in natural resources, the first one estimates the exposure of the country at the price changes of natural resources. It is very high for example in the case of Japan. As for the risk of "degradation", it translates the trend of the country in over-consuming its natural capital: out of the five studied countries, they are India and Turkey which are the most exposed, while France best protects its capital.