Dive Into the Chinese Stars and Spangles.

If there were any doubts that Shanghai was the ‘Paris of the East’ they were surely dismissed last week as Louis Vuitton (LV) took over the city last week.  LV banners lined the streets, massive LV billboards beamed from buildings, newspaper covers were dedicated to the brand,  and entire skyscrapers lit up with LV animations and logos with the arrival of the Louis Vuitton Express in Shanghai.
Why all the pomp and dazzle? It was all the to celebrate the opening of LV’s biggest China store in Shanghai’s Plaza 66 Mall. Each Vuitton store is classified according to size, location and merchandise, with the Plaza 66 store now being one of only 16 Maison stores around the world. 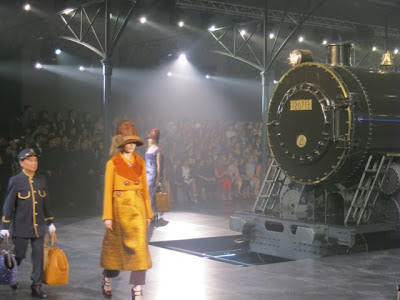 When the Hermès Carré gets married to the Mao collar

One morning of last week, having digested my tea, I went to the newsstand to buy China Daily. Its reading is very advantageous, no both on plan of information and on training of the rudiments of organised disinformation.
Instead of a newspaper, I had the right to a five columns ad. The title, subtitles and photo all had practically disappeared to leave the place in:

To give you an idea of my astonishment, imagine that french newspaper Liberation makes its headline for Hermès carré.
This advertising made noise. On one hand due to the display of an ostentatious luxury in a daily general public, on the other hand because it is about the biggest department store Louis Vuitton in China. This passion for the luxury has even made recently the top story in the Daily of the People (http://renminbao.com/), "why do Chineses so much love Louis Vuitton?" And really, I could determine a true frenzy for the luxury here.
A market which grows by 25 % a year

After these some lines, you will know which groups will use the explosion of this market.


Last year, a study of the financial group CLSA centered on the Pacific region had come to reinforce the idea that the luxury in China was just an eldorado, even more sustainable. While the market of ordinary consumption had to grow by 11 % a year, one expects up 25 % a year over five next years for the luxury.

This frenzy had naturally been followed by the biggest brands. For the only year of 2011, Gucci had opened 12 shops, and should open 10 of more this year.
However the sector noticed a slight slowing down of activity this year, in the wake of worldwide slowing down. The market should grow only by 20 % this year, against 30 % the last year. Burberry announces online results with this forecast over period September-March.
By looking at the fundamental of the market, they however do not doubt that the Chinese market is promised to a big future.

China remains a promised land for the luxury goods

Several reasons are going to be conjugated in years to come to support the two-figure growth of the market:

The Chinese luxury, from "Guanxi" in the market of mass cnsumption

Growth of the luxury goods in China is really assured, while the Chinese protectionism in relation to this sector begins being reduced.
Last March, the former minister of Trade Wei Jianguo announced that '"there will be at least two rounds of reduction [of import taxes] this year on a big number of products". The luxury is one of the big sectors aimed by this measure.
But if this fall of taxes and a probable economic recovery are going to support the market, the increasing power of mass consumption is going to transform this sector in depth. According to the magazine ParisTech, the market of the luxury in China was carried until now by very different social groups:
The tradition of "Guanxi"
It is about the social group which "cultivates" its relationships by giving luxurious presents.
The women
After the group of the "second women", that is to say the mistresses covered with presents by persons high in power, the sector is carried more and more by the larger group of the women, who acquire more and more a financial autonomy.
The tourists
Here even, I met a French tourist of Asian origin, driver of taxi in Paris, who asked the representative for the hotel where was the closest Louis Vuitton shop to bring back presents in France.
White collars
It is this category which is going to make happy the groups best installed in China. It is on one hand about the biggest category, and which will consume mainly in China.

According to Goldman Sachs, it is the emerging Chinese middle class that should support the growth of the market of the luxury goods in China from 12 % currently, to 30 % in 2015. Because remember, this one still represents only 13 % in the Chinese Society.

It is the continue growth of this category that brings some changes in the market. Products have to fit to these new Chinese customers who, if they remain fascinated by the picture of Western brands, they are not none the less Chinese and Asian.

How to benefit from this evolution?

Stories on the mistakes of the Western groups in China are legion. The case of Giorgio Armani is daring. At the opening of its shop at the beginning of 2000s, the group had thought it would be good to put a huge red varnished wooden door at the entrance. The door was quickly withdrawn in front of protests. The clients did not want a "chinesed"luxury store , they wanted the luxury of Milan.


Today, the market changed. His evolutions make that foreign actors of the luxury industry have to strike a balance between their Western image and Asiatic tastes. So Bulgari decided to promote the oriental side, by putting forward the collection Serpenti. Also, the watchmaker Piaget got involved in the celebrations of the year of the dragon.
Other groups try to target new customers. So Gucci tries for some times to aim atmen and kids customers.
My advice

As the president of PPR, François Pinault, declared last Tuesday that his group was buying back a Chinese Brand. At the same time, Hermès is developing a "chinesed" brand of ready-to-wear clothes, Shang Xia. That is why I recommend you to keep an eye on title PPR.
For the most adventurous, a mark can be even more beneficial. It is about the jeweller Chow Tai Fook. In trouble on the market of Hong Kong currently, the jeweller has however a huge network of points of sales divided in 320 cities. This title will give you a better exhibition in the luxury market in Asia.

Mao was joined in the square by a figure of at least equal repute in China: Confucius. Born in 551 BC, the sage, as he is known, left behind a set of teachings as influential as any the world has known. These teachings became the basis of state ideology by the 2nd century BC, and remained so, with some ups and downs, for more than two millenniums. But with the opening decades of the 20th century, prominent intellectuals and political figures took aim at Confucian teachings, arguing that they were in large part responsible for China's backwardness and weakness relative to the West. 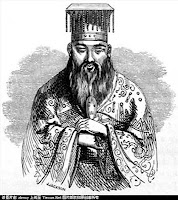 Mao in particular disliked what he believed to be the enduring effects of Confucius' "feudal" practices on the people and, during the Cultural Revolution of 1966-1976, called on the Red Guards to destroy texts, temples, sites and statues throughout China associated with Confucius. No small irony then that, suddenly, in early January, a 17-ton statue of the sage appeared in front of the north gate of the newly renovated National Museum of China — facing Mao's 15-by-20-foot visage hanging above the Tiananmen Gate.

Now, if Mao himself wasn't agitated, his loyal supporters apparently were. Confucius, after all, was an affront to all that Mao had stood — and fought — for. Consequently, Confucius, all 17 tons of him, disappeared on April 20, as suddenly and mysteriously as he had appeared three months earlier. No one has yet come forward with a formal explanation of the statue's comings and goings, but pundits assume, no doubt rightly, that Confucius' appearance and disappearance represent behind-the-scenes political jockeying between different camps within the leadership.

So, Confucius has exited the square. Enter Louis Vuitton. 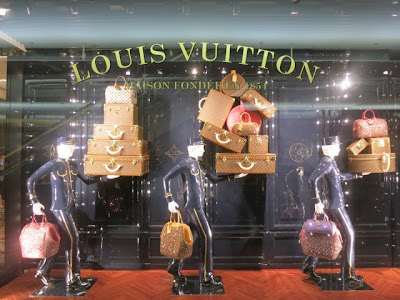 The French luxury goods company has taken up a perch almost exactly where the bronze Confucius had been set down. But rather than outside the north entrance of the National Museum, Louis Vuitton is inside the National Museum. Next to rare porcelain vases and bronze vessels, in a four-room exhibition, are LV luggage and handbags dating to the 1860s, reminding museum-goers of all the luxury the Chinese missed out on after the country's fall from power in the mid-19th century. Clever marketing, especially in a country where the world's high-end brands are all competing for visibility among a newly consumerist population.

The question that comes to mind is this: Confucius has been chased from Mao's square, but can Louis Vuitton, the representative of capitalist luxury and wasteful consumption, be any more palatable to the chairman? Is Louis' presence there preferable to the sage's?

Some Chinese, among them no doubt Mao's followers, have expressed displeasure with a Louis Vuitton show in a Chinese historical museum, of all places. Stores are one thing — there are now 27 Louis Vuitton shops in China — but a spot in the fabulously renovated National Museum in one of the world's most historically rich squares?