The Matrix is a colorfully insightful mosaic of more than 5,000 historical investment periods over the past century. It presents the returns and more for every starting year and ending year since 1900. 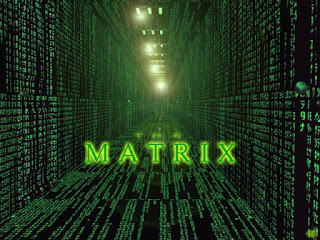 The most powerful aspect of the Matrix is its ability to highlight the pockets of above-average and below-average returns for investors with decades-long horizons, while also demonstrating the calm, long-term average available only to investors with century-long horizons. When Bull's Eye Investing was published, the early signs of a secular bear were just appearing on the edge of the chart. With the Matrix now updated with nine more years of results, it's becoming clear that this may be one of the worst periods of stock market returns.
For perspective, here's a small image of the version of the Matrix that was included in the book  at http://www.crestmontresearch.com/stock-matrix-options/.
The chart presented below, which you may select to link to the original 47KB PDF document, provides nominal rates of return for the S&P 500 index (including full reinvestment of dividends) for each full calendar year period from the beginning of 1900 through the end of 2011 *See explanations below 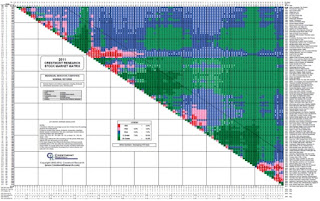 All in all, a very effective way of presenting 105 years worth of stock market performance data, including what rate of return could have been obtained on an investment made at the beginning of a calendar year for any given holding period of interest. But, that's not all - the folks at Crestmont Research have provided more data than they realize!
If you follow the diagonals in the chart, which run from the upper left to the lower right, you can see what the S&P 500 rates of return are for given holding periods. If you follow the left-most diagonal, you will have 105 points of data showing what the S&P has historically returned for a one-year holding period. If you follow the black diagonal line on the chart, you can quickly see the 20-year long rates of return for the S&P 500. And if you take this pattern to the extreme, at the upper right corner of the chart, you will have one point of data showing the S&P 500 rate of return for the 105 year investment holding period!
First, don't try to read the numbers in the image below. Instead, treat it like a Magic Eye chart. Just look at the color pattern. You will note that the pockets of reds and greens along the center horizon reflect high- and low-return periods. In Bull's Eye Investing, the lower right-hand corner of the chart included only the first two columns of red. The addition of nine more columns makes it clear that this is a significant secular bear. Given current valuations and expected future returns, we're likely to see a lot more red columns before the secular bear ends.

Quoting from the book by: Bull's Eye Investing by Ed Easterlink and John Maudlin
As we consider the story that the matrix begins to tell, several observations are initially apparent. There are clear patterns of returns relating to the secular bull and secular bear cycles. The periods of red and pink alternate with periods of blue and green. Once the new period starts, it tends to persist for long periods of time. Though the very long-term returns have been positive and near average, investment horizons of 10 years, 20 years, and even longer aren't long enough to ensure positive or acceptable returns.
Note also that we've recently completed the longest run of green years in the past century. Though we've had a couple of down (red) years lately, it has hardly helped to restore the long-term average to "average." We have quite a distance to go to complete what the mathematicians refer to as "regressing to the mean." As you look back over the past 100 years, there has never been a period where "the "red bear" stopped after a few short years and morphed into a "green bull."
Secondly, when you look at the "Taxpayer Nominal" chart, you will notice that the returns tend to be in the 5 to 7 percent range [only!] after long [again, repeat the word long several times] periods of time. Often nominal returns are 5 percent or less over multiple decades. Again, the charts clearly show the most important thing you can do to positively affect your long term returns is to begin investing in times of low P/E ratios.

Chapter six concluded with a summary section titled "What Does It Mean?" It was definitive. We did not pull our punches and did not hesitate to be specific about the environment in front of us. Low returns, slow growth, and declining P/Es – they have all happened, but they are not over.
The current P/E for the stock market is near the level where all previous secular bears started. Since the inflation rate did not diverge far from price stability over the past nine years, we made only minor progress on the P/E path toward lower levels. We have clearly been in secular-bear waters, nonetheless. This also means that our expectation of a "decade or more" of secular bear conditions was not overstated.  We concluded:


Sadly, the period of low or no returns is not likely to be over soon. P/E has a long way to decline before the end of this secular bear. We can get to the lower P/E ratios that typify the end of a secular bear market and the beginning of a secular bull market by either going sideways (with lots of volatility) for a long time, while earnings continue to rise, or we can see a serious collapse of the price of stocks in a short cyclical bear market. While we suspect the former is more likely, given the various crises afoot in the world and a US government that has the potential to not respond correctly, a serious cyclical bear market cannot be ruled out.
Either way, the next few years or perhaps the entire next decade will be frustrating for investors, as the market continues its rollercoaster ride to nowhere. And given the correlation between US markets and world markets, the coming period is likely to be frustrating in more places than just the US. But savvy investors with diversified and well-developed portfolios will not only ride out the storm, they are likely to achieve investment success. There will be winning stocks and strategies in even the worst bear markets. An emphasis on absolute returns and alternative investment portfolios will be rewarded. Hang on and prepare for interesting times.
* Let's take a moment to explain the layout of the chart. There are three columns of numbers down the left-hand side of the chart and three rows of numbers across the top of the chart. The column and row closest to the main chart reflect every year from 1900 through 2002. The column on the left side serves as our start year and the row on the top represents the ending year. The top row has been abbreviated to the last two numbers of the year, due to space constraints. Therefore, if you want to know the annual compounded return from 1950 to 1973, look for the row with the year 1950 on the left and look for the intersecting column labeled "73" (for 1973). The result on the version titled "Taxpayer Nominal" is 8, reflecting an annual compounded return of 8 percent over that 23-year period. Looking out another nine years, the return for 32 years drops to 6 percent after tax. (Note: Crestmont revised the Matrix to include lower transaction costs after 1975; thus, the updated Matrix reflects a 7-percent return for the 32 years). If we were to use "Taxpayer Real" for the same period, returns would drop to 2 percent. Also, there is a thin black diagonal line going from top right to lower left. This line shows you what the returns are 20 years after an initial investment. This will help you see what returns have been over the "long run" of 20 years.
Also note: the return number for the above example appears in a cell that is shaded light green. The color of the cell represents the level of the return. If the annual return is less than 0 percent, the cell is shaded red. When the return is between 0 percent and 3 percent, the shading is pink. Blue is used for the range 3 percent to 7 percent, light green when the returns are between 7 percent and 10 percent, and dark green for annual returns in excess of 10 percent. This enables us to look at the big picture. While long-term returns tend to be shaded blue, shorter-term periods use all of the colors.
Additionally, some of the numbers are presented in white, while others are black. If the P/E ratio for the ending year is higher than the P/E for the starting year – that is, if the P/E ratio was rising – the number is black. For falling P/E ratios, the color is white. In general, red and pink return cells most often have white numbers, and the greens and blues have black numbers. The P/E ratio for each year is presented along the left side and along the top of the chart.
This theme of rising and falling P/E ratios and the corresponding rise and fall of the stock market is one we are going to return to again and again. If you can understand this dynamic, you will be far ahead of most investors in the race to a comfortable retirement.
Finally, there is additional data included on the chart. On the left side of the chart, note the middle column of numbers. And across the top of the chart note the middle row. Both series represent the index values for each year. They are used to calculate the compounded return from the start year to the end year. Along the bottom of the chart, Crestmont included the index value, dividend yield, inflation (Consumer Price Index), real GDP, nominal GDP, and the 10-year annual compounded average for both GDP measures. For the index value, keep in mind that the S&P 500 Index value for each year represents the average across all trading days of the year.
Down the right side, there's an arbitrary list of developments for each of the past 103 years. In compiling the list of historical milestones, it was quite interesting to reflect upon the past century and recall that the gurus of the 1990s actually believed that we were in a "new economy" era. Looking at the historical events, it could be argued that almost every period had reason to be called a "new economy." But that's an argument for another day.
see the article : http://www.mauldineconomics.com/images/uploads/pdf/mwo070712.pdf
Publié par claude@investlogic à 04:17