Gold : from the Situation Room

Money, although most people don’t view it as such, is technology.
Money is a human abstraction. Money is an idea that’s harnessed to certain standards. For example, archaeologists tell us that primitive societies used colored stones, seashells or pieces of bone as money. 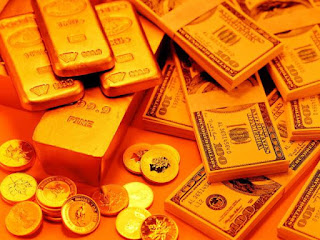 Then for much of human history (including now, depending where you are), mankind used gold, silver and copper as money. In the 13th century, Kublai Khan introduced what some consider the first paper currency (the “chao”) throughout China — an idea that Marco Polo brought back to Europe.
The point is that across the ages, money is a construct — an invented tool — whether it’s seashells, gold, paper currency or even digital ones and zeros on a mobile device app.
Another way of viewing it is that money is an agreed-upon standard. Money is like time zones, where it’s the same time to the east, west, north and south. Money is like a standard unit of measurement, where a pound of steel weighs the same as a pound of feathers. Or money is like the width of railway gauge, so that rail cars from one railroad can run on the tracks of another railroad.
Thus, money is, at root, technology as much as any other basic machine like the wedge, lever or wheel. And along with other basic machines, the idea of money has evolved over many thousands of years of human history.
Today, Kublai Khan’s Chinese “chao” have evolved into modern U.S. Federal Reserve notes, as well as the multitude of other world currencies, from pounds to euros to yuan and much more. 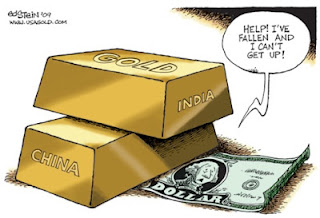 When Money Breaks Down…

Now, I’d like you to consider what happens when a system of money — a system of technology — doesn’t work, or just breaks down. It brings to mind an old expression from the Soviet Union, that “They pretend to pay us, and we pretend to work.”
In other words, the Soviet Union was a society with a centrally planned command economy. The system of account, exchange and value was geared for the good of the state, but not much geared for the overall good of the people.
Over time, the currency — the Soviet ruble — ceased being much good for anything. Indeed, the ruble was a dodgy unit of account, a poor medium of exchange and a problematic store of value. Basically, there was little to buy in the Soviet command economy, and the Soviet people behaved accordingly. Their “money” (such as it was) shaped their attitudes.
The Soviets may have had good technology when it came to things like building tanks, rockets and nuclear bombs. But the Soviet economy failed to deliver for the good of the people. Eventually, the Soviet ruble was an economic technology that failed — along with the national construct known as the Soviet Union.

Looking ahead, I’m concerned with the trajectory of U.S. governance and the future of the economy. But I don’t anticipate that the U.S. federal system will somehow collapse, like what happened with the Soviet Union — although I’m willing to have that talk at another time and place.
Still, for the life of me, I cannot envision how the U.S. will avoid more inflation. Federal spending is out of control, and the economy is struggling to gain traction.
I don’t see how U.S. “monetary technology” — the dollar — can hold its value over the long haul. Next to moving out of the country to Singapore (like Jim Rogers, for instance), my fallback position is to keep building a precious metal portfolio based on physical metal and investing in well-run miners.
Along with gold, every portfolio should have exposure to silver.

Indeed, if you don’t own physical silver — coins, small ingots, bars, etc. — then get some! Buy metal and take delivery. I’ve been saying that for a number of years, since silver was selling at $10 per ounce. Don’t dwell over the near-term ups and downs. Silver is your safety fund for if (or when) the wheels come off the economic bus.
The recent silver selloff is due to turn around — silver is currently selling in the range of $27 per ounce. That’s far above the historical lows of $5-10 per ounce from the early 1980s, 1990s and early 2000s. But it’s also far down from the high over $45 last year.
Silver has a long, steadfast history as money, going back to ancient times. Yet it’s also a substance with a promising future, thanks to its critical role as an industrial-technological metal. Aside from the traditional uses as money, silver has innumerable uses in electronics, medicine and other metallurgical applications.
In the past several years, silver prices have moved due to demand driven by investors. Silver appeals, along with gold, as a safe (at least, safer) haven as an investment in times of economic uncertainty. Like now.
Money is technology. Many modern currencies are a failing technology. It’s time to get back to basics, and that means silver.
Byron King

Gold Is Nearing the Breaking Point

Looking to time your next purchase of gold? There’s no time like the present: The ideal seasonal “window” for gold purchases opened yesterday.
The annual Thackray’s Investor’s Guide attempts to pinpoint the best times of year in which to buy various asset classes. The 2012 edition notes, according to Canada’s Globe and Mail, “the optimal time to invest in gold bullion for a seasonal trade is from July 12-Oct. “We believe that ultimately the Fed will be forced to do quantitative easing,” the firm’s commodities research chief Francisco Blanch tells CNBC. “If it happens in September, as our economists expect, we will get a rally sooner in gold.”

For the past couple months, the yellow metal has been stuck in a trading range between about $1,550 and $1,625. But that range has been tightening, and gold has been storing up energy for another big move. That move could happen as early as next week.

Take a look at this chart of gold…

Gold is approaching the apex of its triangle pattern. That's the breaking point – where the metal either breaks out to the upside of the pattern or breaks down. Either way, there's the potential for a $140 move in either direction. And based on the chart, it could happen in the next couple weeks.

Frankly, I'd love to see the metal break down here and give us a chance to buy it near $1,450 per ounce or lower. But I'm starting to doubt we'll get that lucky.

With all the recent talk about a global recession, deflationary pressures, and Bernanke's testimony to Congress last week that he does not want a third round of quantitative easing… gold has had plenty of reasons to drop in price. But it's been holding steady above the $1,550 support zone. Maybe we won't get a chance to buy it at as huge a discount as I'd hoped.

There is a big move coming, though, and here's how I plan to trade it…

If gold breaks out to the downside of the triangle and loses support at $1,550, I'll look to buy the metal somewhere around $1,450 or lower. That will be the best gold-buying opportunity we've seen in years.

On the other hand, if gold breaks out to the upside and rallies above last month's high of $1,625, forget about buying it on sale. Just buy it. Gold will have entered "rally mode," and will likely challenge its February high above $1,775.

Either way this plays out, there's big opportunity ahead in gold.

Gold mining shares deserve their own discussion. I am bullish on gold without qualification. I am also bullish on gold miners…but with one very large qualification: they must produce positive cash flow.
I think the bull market in gold is intact. And I think gold prices will make highs within a year.
However, gold stocks have done poorly. Few have been spared. Like the other mining companies, they suffer from the same affliction: an eager willingness to take whatever cash they generate and dump it right back into the ground.
So even though the four largest listed gold miners — Goldcorp, Barrick, Newmont and Newcrest — generated $47.5 billion in operating cash flows in the last decade, they spent $62.5 billion in new mines, acquisitions and other capital expenditures. The big four have made no money in one of the greatest gold bull markets on record. In fact, they’ve lost money.
How did they make up this deficit? They sold more shares to the ever-gullible public — always a sucker for a good story about buried treasure. The number of shares outstanding rose 117% in the decade.
I’ve railed before about the management of gold miners. And I’ve tried to find gold miners in which the management teams do intelligent things. But it is hard. Even when you think you have found a team that says all the right things and looks as if it can do it, it does stuff that makes you scratch your head.
Aurizon Mines (Symbol: AZK. Price $4.43), for instance, is a wonderful miner. It generates plenty of cash. It has nearly $200 million in cash in the bank and no debt. But where is the payoff for shareholders? There is no dividend, no share buyback. Despite record revenues and cash margins, AZK’s cash balance is actually 7% lower than a year ago — again, because they put it all back in the ground. The share price is down almost 10% year over year. And this has been one of the better-performing mining stocks!
It’s very frustrating…
Still, price-to-cash-flow multiples have fallen to generational lows. During the last two decades, the XAU Index of gold mining stocks traded, on average, for 14 times cash flow. Today, the XAU is selling for less than 7 times cash flow, which is very close to its all-time low. So with smaller miners that produce cash flow, you have the chance of a good bounce to something closer to historical norms. The best case is a buyout by one of those free-spending bigger gold companies.
Publié par claude@investlogic à 06:00