Imagining an end to the dollar’s reign

What is rarely questioned is why the dollar plays this role in the first place. And when you delve into it, it’s hard to come up with much more than self-fulfilling logic: The greenback enjoys this status because it always has.
But against the blindingly obvious fact that our global financial system is broken, the empty foundations upon which the dollar sits could equally be brought into question. One day, the dollar’s role as the world’s reserve currency will end. It won’t happen overnight — the dollar is too deeply entrenched in the plumbing of international commerce and investing for that and there simply aren’t viable alternatives — but it will happen.
Economic historian Barry Eichengreen, arguably the world’s leading expert on international monetary affairs, has argued that the dollar will lose its dominance within 10 years. The world needs to be ready for it. 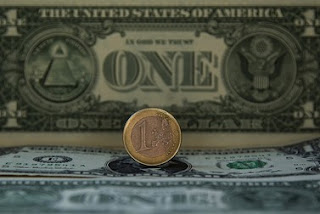 For now, everyone still wants dollars. The greenback accounts for more than 80% of all foreign-exchange transactions, over half of all international trade invoices and two-thirds of central bank reserves.
In large part, the dollar’s appeal stems from the unrivaled depth and liquidity of America’s capital markets. But on many other levels, the U.S. is no longer the bastion of international financial security that it was. It is closing in on $16 trillion in debt, a figure larger than its GDP; it persistently runs twin fiscal and trade deficits; and its foreign currency reserves are barely enough to cover two weeks of imports.
Meanwhile, other arguments for the dollar’s appeal such as the reliability of its legal system and respect for property rights are beginning to ring hollow when other countries’ judiciaries are equally trustworthy and when foreign investors harbor bitter memories of a financial crisis for which dysfunction on Wall Street and in Washington was to blame.
In fact, much of the dollar’s appeal simply lies in what is not. The euro has proven to be a disaster and the other oft-mentioned successor — the Chinese yuan — is the currency of an authoritarian regime whose love of capital controls prevents it from being easily traded offshore. Neither will be a viable alternative to the dollar for years, if not decades.
But for the dollar to lose its influence doesn’t require an alternative reserve currency to emerge. China and other big holders of dollars could simply stop building reserves. Or worse, they could repatriate those that they do hold, a prospect that rises the longer the U.S. fails to resolve its future debt problems. Already, China is developing alternative payment mechanisms that will allow a convenient go-around for nations wishing to trade commodities in currencies other than the dollar — Iran, for example, which would appreciate a means of avoiding sanctions. If there were to be a big enough withdrawal from dollar assets and dollar invoicing, the world monetary system could be thrust into the chaotic state of having no single, dominant currency as its anchor.
For now, it seems hard to imagine that the current state of play won’t be so forever. We remain smugly comforted by the notion that China, Japan and U.S. other big creditors wouldn’t want to upset a market in which they are so heavily invested. Yet such complacency is part of the problem.
Demand for the dollar means that, despite its multiple flaws, the U.S. government can now borrow at a record low of 1.5% for 10 years. That means that the pricing mechanism, the one with which markets normally impose discipline on debtors, isn’t working. The problem is that this state of blissful isolation from market realities can quickly disappear. Just talk to a Greek citizen.
The U.S. is dangerously addicted to the drug of cheap dollars. Meanwhile, other countries increasingly feel vulnerable to the market volatility that comes with America’s sometime reckless use of the dollar’s dominance. The dollar’s global status means that whenever the Federal Reserve turns to the printing presses — as it will likely do again in another futile bid to fight America’s economic malaise — those freshly minted dollars flow into commodity markets and the currencies of emerging markets. That complicates policy-making in those countries, the same ones that happen to be the biggest holders of dollar reserves and thus the ones with the power to demand change.
For more than half a century, the dollar’s reserve status has assured the U.S. of a prodigious flow of cheap financing. It has bankrolled the most powerful military machine in history and facilitated the rich material existence of its people. But the world won’t forever allow it to enjoy what former French President Valerie Giscard D’Estaing described as America’s “exorbitant privilege.”
It behooves U.S. policy makers to start considering a multilateral alternative to the dollar. An International Monetary Fund-sponsored reserve unit is often floated as one idea — one that currently faces various obstacles but that could be resolved through a well-designed treaty.
But at some point they will need to be part of the national discourse. It is far better for the U.S. to plan an orderly exit from dollar dependence than to have the rest of the world force it into a disorderly one.
Publié par claude@investlogic à 10:47