An history of the lie


Lie’bor, or the art of the lie

Lies and YOUR money

When it comes to your money, the Libor scandal teaches three simple principles of money management. First off, be suspicious of any steward put in charge of your wealth. At all times, beware of the liar and do your utmost to establish trust. Next, remember the danger of agency risk. For every person you put between you and our money, you compound the risk of a dishonest manger damaging your portfolio. Finally, demand transparency. One of the big problems with LIBOR, according to Ben Bernanke, was a lack of transparency in the process and data used to establish rates. 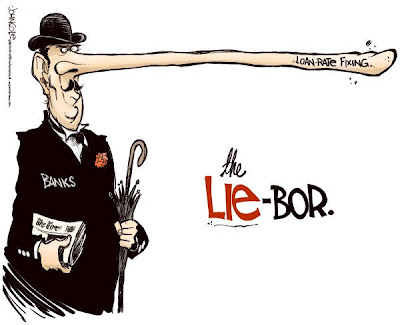 An history of the lie

Lying has a noble history, hearkening back to the beginning of time itself. By taking a simple jaunt back to the Garden we find God's booming, "Who ate my apple?" met by innocent looks and an eventual and timid chorus of, "Not me."

Little doubt that a few short days later this first lie was followed by Adam’s retort of "No, dear" to Eve's insecure query, "Honey, does this fig leaf make me look fat?"
Lying had a good start with humankind, but its place in history was forever cemented when God sorted through the universe of sins and chose lying for his “Top Ten List of Dos and Don'ts.” Yes, right alongside the other biggies of murder, stealing and coveting, lying took on epic status and grew by leaps and bounds.
Humanity found new and better ways to lie, including, of course, the invention of the game of golf by the Scots in the 1300s. This may have possibly been the single greatest achievement in lying history, committing hordes of men to habitual lying via the infamous and hidden foot wedge, to the more bold "I'll take a mulligan," to the outright blasphemy of "put me down for a four."
And with the ever-growing popularity of lying, it has become increasingly difficult to impart good will and trust to our fellow man.
To the discerning, the lore of George Washington's famous confession to the cherry tree massacre — "I just can't tell a lie, pa" — has the smell of a good quality lie about it. Maybe we can look to honest Abe for hope in our political leaders.
At the turn of the millennium, however, lying seemed to have lost its thrill and become tragically predictable and mundane. The news was filled with trite and overplayed white lies and media brouhahas, from the lip-syncing Grammy scandal of Milli Vanilli to the James Frey ”A Million Little Pieces” autobiographical fantasy so passionately promoted by Oprah as truth.
For a long while, it appeared as if lying had fallen on hard times and couldn't be improved upon. Fortunately, for lying's sake, in recent years, Wall Street, seeing the utter dearth of any truly shocking falsehoods, took it upon itself to stand up and shake the world with profoundly authentic deceits.
It began with the likes of Bernie Madoff, who led the charge with his remarkable $54.8 billion Ponzi scheme, leaving in his wake families and institutions whose life savings evaporated in a day.
Raj Rajaratnam of the Galleon Group joined the fray, adding his insider trading lies to the mix of Wall Street tragedies, picking the pockets of hardworking Americans as he lined his own.
Goldman Sachs joined in on the ruckus by promoting vacuous securities to its clients while privately dumping these wretched investments from their balance sheets.
And then there was the subprime banking scandal — a true jaw dropper. CDOs and other forms of securitized trash were peddled upon the unsuspecting, leaving waves of misery to wash over the world spreading recession and financial ruin.
Now, in recent weeks and in what many hope is Wall Street's grand finale, Barclays has served up the Libor scandal. Libor stands for London interbank offered rate, and it involves a group of bankers who set the daily interest rate affecting an estimated $800 trillions of transactions world-wide, including home mortgages, college loans, credit card fees and beyond.
It turns out that Barclays and other banking insiders were manipulating the index as far back as 2005, raising their profits at your expense during the good years and making their banks look better off during the financial crisis. "The Economist" magazine described it as "the rotten heart of finance."
Just how big it the Libor crisis? Journalist Bill Moyer called it "huge". Eliot Spitzer said, "This is about as big as it gets in the financial world and goes to the heart of every piece of debt that's issued to consumers."
Furthermore, the scandal has grown. What initially involved Barclays has now enveloped 16 banks and will result, according to a study done by Keefe, Bruyette & Woods, in an estimated and historic $35 billion in fines.
It appears that with the Libor scandal, the ignoble art of the lie has been truly and ultimately resurrected to a new and stunning height, capturing the attention of even the most committed fibbers.
The American public, once terrorized by gangsters, now lives in fear of banksters, a new and more terrifying criminal. The bankster is an equal opportunity liar, working stealthily while pillaging the homes of widows and orphans to kings and priests, alike.