Investlogic Strategy Update as of July 1, 2012

Little was expected from the EU summit, but quite a lot was actually delivered, although some follow-through will still be required if investors are to retain their newly found appetite for risk.

Analysts have generally argued that the euro’s survival depends on further integration of the eurozone economy, emphasizing the need for a banking union, a fiscal union and a political union. There was clear progress on the first and some on the second. And while there was no direct mention of the third, that becomes much easier once the first two are evolving satisfactorily. There was also a “nod” to growth. The main provisions were:
Equities: Everything changed on Friday. Equities traded choppily with a generally offered tone over the first four sessions of the week, then exploded to the upside in the last session. Italy and Spain soared 6.6% and 5.6%, respectively, on the day.
Bonds: The opposite was true for bonds. They traded choppily with a generally bid tone until giving up ground on Friday. Of course, there were a couple of exceptions. Italian and Spanish bonds rallied along with their equities.
Currencies: EUR/USD was offered through Thursday, but rallied over two big figures on Friday.
Commodities: Gold and oil rallied sharply on Friday as concerns about Europe faded.

The political and financial cost of an incoherent exit of the euro would be simply too high, and for Greece, and for other members of the euro area. If the politicians agree in understanding that they dispose of enough funding to keep Greece within the euro, they are as conscious that these funds wouldn't cover all the economic and political repercussions for the zone, hence the agreement to support it by new non-conventional measures of monetary policy by the European Central Bank and the new born European Stabilization Mecanism. Out of the euro area, it becomes visible that total economic recovery weakens. American growth weakened, but shouldn't slow down as noticed in 2011.

In emerging countries, after a recovery of equity markets since the lows of October, 2011, fed by a renew appetite for the risk of the investors, the rebound of the expected profits should carry the next movement of increase. From this perspective, it is the Chinese economy which remains decisive. The weaker growth of former quarters reflects the deep monetary tightening operated the last year to decelerate the activity of credit - quickly overturned when negative effets on small and medium sized enterprises became visible.

If Chinese economy continues however decelerating, a combination of measures of monetary expansion  and of a recovery stimuli plan including investments in infrastructures would lead to a recovery, supporting other emerging markets. 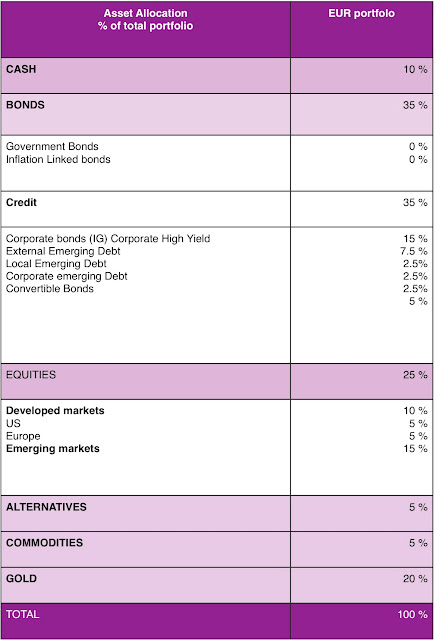 Equities Markets - include from now on the impact of a slowing or no growth seems to have reached a floor on the short term.. The risk premium is indeed at levels which would correspond to an stagnation of profits. Besides, the perspective of an expected coordinated  action by the central banks to lower  tensions on markets should constitute  a floor for actions, even if the timing of an intervention remains uncertain. In the States we are still in an election year which would also provides some supportive measures. The perspectives of the American economy growth, the robustness of the company profits  and the strength  of the dollar US should give some support to the US stock market. Conditions remain also positive for the emerging markets.

On the Bond side, Corporate and High Yield always introduces welcome diversification and potential higher returns (see below). However,as long as it remains high uncertainties on the European crisis  and in the timing of a global  economic recovery, we are encouraged to protect us of turbulences by overweighting of German governmental bonds and some long-term US T-Bonds, as well as of course as an large part  gold.

Specifically, Grant is bearish on one of the very “safest” of safe things: highly rated government bonds. “The times may be troubled (they often are),” he says, “and people may be desperate (someone usually is), but that doesn’t mean that low-yielding sovereign debt is the last word in safety and soundness.”

Grant does not assert that top-tier government bonds are necessarily unsafe, merely that they are undesirable…and potentially unsafe. At current yields, many government bonds offer what Grant has termed, “return-free risk.”

As the nearby chart clearly shows, the yields provided by the marquee AAA government bonds of the US, Germany, Switzerland and the UK have been in a freefall for several years. As recently as four years ago, a 5-year bond from the Swiss government yielded about 3%. Today, the 5-year yield is negative! That’s right; an investor must pay the Swiss government for the privilege of lending it money.
The 5-year yields provided by the other AAA issuers in this chart are at least positive, but just barely. All of them yield less than one percent per year. Longer-term yields from these AAA-rated governments are similarly underwhelming.
Therefore, Grant suggests, rather than buying the 10-year German bund that yields a whopping 1.75%, why not buy the common stock of the German chemical giant, BASF, which is currently yielding about 4.3%?
“By the same token,” Grant continues, “we favor Wal-Mart over the 10-year Treasury, and Nestlé over the 10-year Swiss government note. Wal-Mart, which yields 2.4%, and Nestlé, which fetches 3.5%, have shown the ability to grow and adapt in economies both good and indifferent.”
Clearly, the shares out of BASF, Wal-Mart and Nestlé are not “safe” in the sense of providing a certain, government-guaranteed return. They are safe only in the sense of offering a potential return over time that greatly exceeds that of today’s ultra-low yielding sovereign bonds.
Furthermore, equities deliver returns that derive from real-world commerce, rather than from the increasingly dubious promise of a heavily indebted national treasury.

If in 2012 emergent equities overperformed, in some respects, of about 3 % the equities in developed countries, the last published figures mention one flat performance since the beginning of the year versus one light advantage to for the developed markets. However as in 2011, this visible under-performance comes out again mainly from a comparison with the American market. Due to the disappointing performances of the most part of Europe and to the weakness of the Japanese rally, the emerging markets continue nevertheless outperform the developed economies, except the United States, of about 3 %.


As long as questions will persist if Greece is going  to stay in the euro area, risky assets should continue to underperform. This period of uncertainty should be of relatively short term and it could be wise to reinforce the exposure  on the emerging markets later in year. On the basis of the expected multiples (ratio lesson / benefit), equities stay on the whole attractive, but the  stronger growth in benefits within the emerging markets companies should be translated by the higher performances.
The dynamics which drives the performance of the emerging markets however evolved. Two major topics focalized attention in the course of last decade: 1) the exports of raw materials towards China, 2) exports of consumer goods towards the developed world. The slowing down of the growth of China should weigh on the overall demand of raw materials from this country. Current debate does not limit itself to determine if China faces up a soft landing of its economy or in harder landing scénario. There remains that China still has  huge needs in infrastructures and even the assumption of a more modest growth rate - between 7 and 7,5 % - guarantees a strong demand for a lot of raw materials, particularly industrial metals. Countries and traditionally profitable firms of Chinese demand are going to continue to profit from it, but probably to a lesser extent.
The accent should be put from now on more on the internal growth of the emerging markets rather than on the demand of of the developed world consumers, which should remain apathetic during several years. On the other side, many emerging countries achieved a level of development such as their internal demand is becoming a factor more and more contributing to  the growth of their GDP. If many investors are already aware of attraction that the Western luxury products have on these consumers, it concerns only a marginal part of the population. True opportunities will be in the consumer goods of lower range. This potential can be noticed in the over performance in equities of consumption goods sector which was 2,3 times superior to that the broad emerging market index since March, 2009, as well as in the performance of small capitalisations, more exposed to internal demand. The sector MSCI Small Cap advanced of 91 % over 3 years against 61 % for indication Broad Cap.